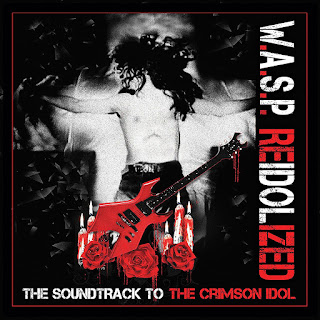 I guess there are any number of reasons you can come up with for wanting to re-record an album from your back catalogue, especially one that is as dear to the hearts of fans as The Crimson Idol is. I imagine in this case that the main reason for Blackie revisiting what some believe is his magnum opus is that he wanted to bring it closer to his original concept, to add in the things he left out the first time, and to change some things that he was no longer comfortable with. Whether it is a great or foolish idea will be in the eye of the beholder, if for no other reason that the original album was so popular, did it really require any touching up?

The original 1992 album is one of my favourite albums of all time. There is a real angst and anger delivered throughout the album and storyline, and the musicianship, especially in the drumming of both Frankie Banali and Stet Howland is incomparable and in Bob Kulick’s guitar riffs and licks. Almost every song is a winner in its own way and at that time of my life it spoke to me in a way that the grunge-soaked rock that was proliferating the music world then couldn’t do.
As to this re-recorded version, well… in many instances it doesn’t have the same effect as the original did. Don’t get me wrong, the great songs are still great. The opening from “The Titanic Overture” and “The Invisible Boy” to “Arena of Pleasure” and “Chainsaw Charlie” are still terrific, but they do not have the same anger and defiance and angst in the vocals and the music that the originals did. They aren’t stonewashed as such, but they are less powerful. The current line-up of Blackie, Doug Blair, Mike Duda and Mike Dupke do a good job of recreating each song, trying to get the same nuances and not messing about too much with the song structure, but it isn’t the same. Blackie tries to give us a few harmonies in the vocals which work for the most part. There are six ‘new’ tracks added to the album, which for actually mess up the whole feel of the story and disrupt the continuity of the music. I cannot get used to not flowing straight from “The Gypsy Meets the Boy” into “Doctor Rockter” which has always been a great pick up. Instead, we have the quiet reflective “Michael’s Song” and “Miss You” which was also added on the previous album Golgotha. Then, once we had the power ballads of “The Idol” and “Hold on to My Heart” we would crash into the epic closer “The Great Misconceptions of Me”. Here though we have four further additions. The clear guitar driven “Hey Mama” is followed by “The Lost Boy”, which very much sounds like a post-2001 era W.A.S.P. song, and for me feels out of place because it does come from a different time period of the band. “The Peace” just feels like it’s a repeat of “Hold on to My Heart” (of course with different lyrics telling a different part of the story) and “Show Time” another short addition. All of this for me stops the story and album in its tracks, and takes away some of the enjoyment. For those who are not familiar with the original this shouldn’t be an issue.
There is also the noticeable elimination of language from the album. The changing of words in the middle of “Chainsaw Charlie” makes it a little awkward to listen to on this album. It tends to detract from the power of the middle of the song, where the real charge of the album comes from. There is also the exchange between Jonathon and Alex Rodman pre-“The Idol” which has the harsher words changed for less demonstrative ones. This isn’t a big thing, and was no doubt an obvious move given Blackie’s changing belief system in recent years, but for me it takes away a part of the energy and drama of the album. On the positive side, I can at least allow my ten year old son to listen to this version of the story without fear of him listening to words he probably shouldn’t at his age (but given he is a fan of W.A.S.P. he has heard them all anyway).

Blackie had his reasons for taking on this project again, and for making the changes he did. That’s fine, and if it introduces new kids and new fans to this great album then it is more than worth it. Those that listen to this without the looming large shadow of the original hanging over it will be pleasantly surprised by a wonderful rock opera filled with awesome heavy metal tracks mixed with some slower ballad tracks that for the most part combine together well. Everything sounds great here and is in its right place. The Crimson Idol is still one of my favourite albums ever, and in being seen to judge this somewhat harshly it is only because I have such fondness for the original production.

Rating:  “But the dream became my nightmare, no one could hear me scream”.  4/5