APJSC Under 11 Reds: Round 3 vs Coniston Gold 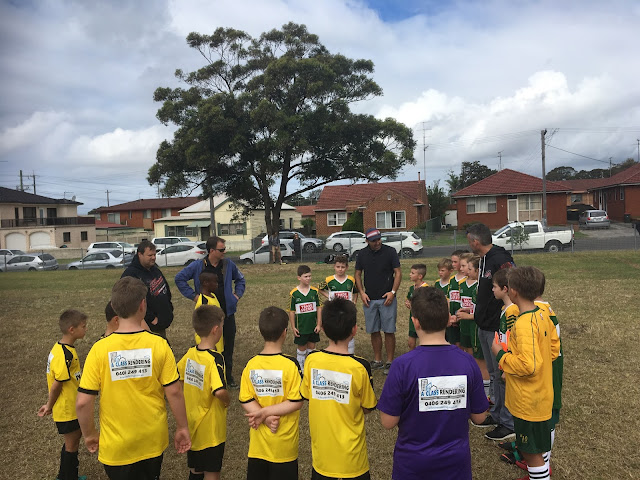 The Albion Park JSC Under 11 Red team faced a tough away game on Saturday against Coniston Gold at McKinnon Oval, but perhaps didn’t expect it to be as ‘tough’ as it turned out to be.

With Ky and Indy absent the team was lucky to have Under 10 players Johnny and Jayden fill in for the day, and their speed and enthusiasm up front kept the pressure on the Coniston team.

The game was hard fought from the outset. The Coniston team were big bodied, and although that could have been intimidating the Red team used their improving skills and speed to keep them on the move. A couple of attacking moves early on found the ball sneak across the face of goals but not over the line. The backline of Belle Kadwell, Brock Young and Josh Peters worked hard in keeping any attacking moves at bay, clearing well to the midfield on a number of occasions. After 15 minutes, Josh dispossessed his taller opponent and passed meticulously to Jack-Ryan Eberwein on the right wing, who moved down his wing, beat two opponents and then crashed the ball to the goal where it forced its way through the keeper’s legs to get the Reds on the scoreboard and a 1-0 lead.

The work rate of the kids was enormous. Belle was unstoppable, chasing down every player who made their way through midfield, worrying the ball off them and then supporting down her flank. Zoe Middleton and Claire Kadwell up front on the left side of the field ran at everything, not giving the Coniston players any time or room to move, consistently frustrating their attempt to get to the other half of the field. Up front Noah Black did well to keep himself clear of defenders, giving his teammates an easy mark to kick to and open up attacking opportunities. He had one shot that just went wide of the right post, and his sharing of the ball was also excellent. This pressure eventually led to the Reds second goal, when a shot almost caused an own goal for Coniston, but Johnny was on the spot to put the ball in the back of the net and take a 2-0 lead.

It was not all one way traffic, and while the defensive line was good there were three or four chances for the Coniston team to open their account, but they were twice denied by good goal line defence from Brock and Josh, and there was also two great saves by Jack Tate, one a fantastic dive to his left that would have made Mark Schwarzer proud. At half time the score remained at 2-0.

There was plenty of enthusiasm from both teams to open the second stanza, with Coniston making three big attacking raids on the goals, but they were repelled by two brilliant saves by Noah who had taken over the custodian’s role, one a pure reflex screamer that must have been frustrating for the home team. The defence held though, and once these attacks had been dispelled the Reds put on another goal for themselves, this time Jayden able to breach the defence to put the Reds up 3-0.

The remainder of the game was somewhat overshadowed by the roughhouse tactics by some of the Coniston team that unfortunately were mostly overlooked by the official. But the Reds team soldiered on bravely and refused to take a backwards step for any of them. Jack Tate was barrelled over unceremoniously after he had made a cracking shot on goal that was only denied a goal by a terrific save by their keeper. Belle Kadwell was monstered in one play where she was elbowed once and knocked down twice illegally, but she kept getting up and took the ball off him three times in the same play. Brilliant stuff, and she refused to leave the field of play. Josh got knocked down and trodden on at least three times for no whistle, while almost every player felt the tough tactics of their opponents. And yet, none of them buckled and they refused to return the tactics. It was great play by all the kids and a credit to their coaches Shane and Andy for the way they held themselves.

The final score of 3-0 was a tremendous effort from the team, and they should be rightly proud of their efforts.

Player of the Day was Zoe Middleton who against didn’t stop for the whole game, and took some punishment herself against the bigger boys that she refused to shy away from, and she showed a lot of bravery in continue to get in their face and take the ball off them even when she was being kicked in the shins and ankles for her trouble. Well done Zoe, you deserved your award today. 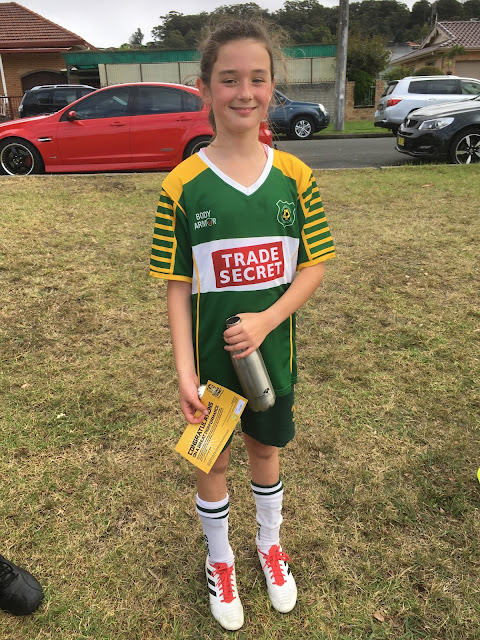