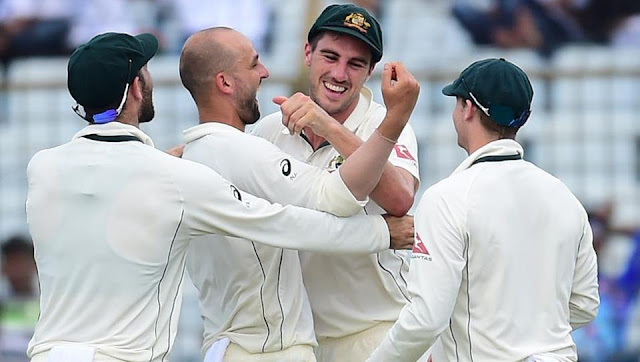 It is difficult to get a true perspective on what yesterday’s Test victory for Australia really means. Many would say that Australia should have won this Test as easily as it did, as it should have a superiority over the still-developing Bangladesh team that could be brought to the fore as it was in taking victory on the fourth afternoon. Others will point to the team’s poor performance on sub-continent wickets and their loss in the 1st Test and suggest that to come back after that was a wonderful effort. It is hard to please everyone or to get a real line on what the win means for Australian cricket – a great victory and reward for hard work in these conditions, or barely managed reparations for the poor loss in the previous Test. Make up your own mind on that one.

Australia wasted eleven balls and ten minutes of their day batting on at 9/377, all of which may or may not have worked in their favour. No further runs were added, but it kept the Bangladesh opening batsmen antsy as to when they would have to come out and face the music. Sometimes this kind of mental play works, and given what happened during the remainder of the first session you would have to say that it ended up working in Australia’s favour.

It was no surprise to see Cummins and Lyon opening the bowling, and once again it was Cummins who forced the issue with his pace and bounce on the dead Chittagong surface. This time however he was rewarded for his efforts, getting Sarkar to edge to Renshaw for the first wicket. Soon enough it was O’Keefe who came on to replace him, and he and Lyon were given the bulk of the bowling to do. O’Keefe was much better in this innings, with the bowling he had to do in the first innings obviously offsetting his long break from competitive cricket. He looked more menacing and played the perfect foil for Lyon at the other end who was now in his zone. Either side of the drinks break Bangladesh lost 4/11 off seven overs, crashing to 5/43 and real trouble. Lyon out-thought Tamim, Imrul and Shakib, erasing any thoughts they had of repeating their 1st Test heroics. O’Keefe took care of Nasir in the same way, and the air of the Test match had turned completely.

Now Australia had to overcome their constant problem with the middle order, and find a way to break through its resistance which they had shown they had trouble doing. Again Mushfiqur and Shabbir resisted, getting to lunch unbroken and pushing on afterwards. It was Pat Cummins who again made the vital breakthrough, after 86 runs had been added for the loss of Shabbir’s wicket. Cummins bowled the perfect ball in the corridor, taking the edge of the stubborn Mushfiqur’s bat and ensuring Bangladesh’s final batting hope was on his way. Another 19 overs of resistance came from the final three wickets before they were dislodged, but it was Cummins wicket that meant Australia would not be chasing a 150 run lead. Bangladesh’s dismissal for 157 would have been exceptionally disappointing for them, as a chase of anything over 150 would not only have been difficult, but brought the game closer to a rain interruption on the fifth day as well.

While Cummins 2/27 contain the two vital breakthroughs and also heralded the culmination of his wonderful return to Test cricket in 2017, it was Nathan Lyon who gained all of the plaudits, and with good cause. He bowled almost unchanged through the final innings, his 33 overs bringing forth the figures of 6/60, and match figures of 13/154, a remarkable achievement. What he had begun in India he had completed here, finally becoming the spin bowler Australia needed, who could not only hold up a team on the rampage, but bowl his team to victory in the second half of a Test match, especially when conditions were suited to him. Despite already having over 260 Test wickets, you would expect that it is 2017 that will prove to be the turning point for Lyon as a spin bowler. He now looks to know what is required to win Tests for his country, and while no one expects him to be Shane Warne in this regard, he now has the experience and the know-how to hopefully do it on a regular basis.

Not even Australia’s harshest critics would have believed they couldn’t get the 86 runs they required for victory, but it was important they didn’t make too many trips along the way. Warner went early pushing hard, while both Renshaw and Smith looked to impose themselves and get the game over as quickly as possible. Both fell to injudicious strokes which would have disappointed them, but it was their positive play that kept the runs ticking over. In the long run, it will have done both Handscomb and Maxwell good to have been together to knock off the required runs for victory. Again they were positive in their play which was better than nervous prodding towards a small target.

So the series is drawn 1-1, and while Australia will rue falling 20 runs short in Mirpir which cost them a series victory, that victory will be of more benefit to Bangladesh cricket than a victory to Australia would have been to them. It has opened up the possibility of Bangladesh now being able to compete on a larger scale in Test cricket around the world, and has also shown the talent that their squad has. For Australia, the experience gained against spin bowling in spin friendly conditions that they have faced both here and in India for players like Renshaw, Handscomb and Maxwell will be of enormous benefit in the years to come. Now, they need to return home and get some much needed practice on their home wickets in preparation for the festival of cricket that is the Ashes which begins in a few short weeks.
Posted by Bill Peters at 8:44 AM