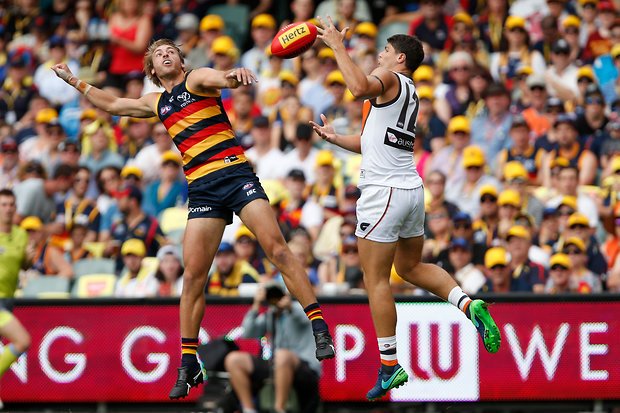 For what it is worth, here are my thoughts on the AFL finals starting tonight.

The Crows have shown some vulnerable holes in the closing weeks of the preliminary rounds, giving up a 50 point lead to Collingwood before drawing the game on the bell at the MCG, and losing at home to Sydney despite a massive free kick advantage, before losing in the final round to West Coast in Perth. The week off might be the best thing that happened to them. GWS aren’t the same team as last year when they entered the finals with momentum. The thrashing at the hands of Geelong was preceded by hard fought and unconvincing wins over West Coast and Fremantle at home. They also would have appreciated the week off. If GWS was to get up and defeat the minor premiers in front of 50,000 crazy fans at Adelaide Oval it would be one of the upsets of the season.
Adelaide by 24.

GEELONG vs RICHMOND
Will they get 90,000 to this match at the MCG? It deserves that kind of crowd. Geelong have been anything but title contenders this season, and yet finished second by rights of their thrashing of the young gun GWS team. They’ve had gritty victories over Collingwood and the Tigers as well as being belted by Sydney. Richmond is riding a wave of emotion and their supporter base is baying for victory. They’ve won six of their last seven matches, only losing in the clash with their semi-final opponents. If the game is anything like their last encounter, it will be close if nothing else. Richmond will never have a better chance to progress to a preliminary final, while Geelong will be driven by Pat Dangerfield to the final siren. Perhaps the match result lays in his hands.
Geelong by 16.

SYDNEY vs ESSENDON
If John Worsfold isn’t high on the list of candidates for Coach of the Year there is something wrong. What he has done with Essendon over the last two years is nothing short of a miracle. They lost by a point to Sydney in Round 14 at the SCG. Since then they have played only one team that finished in the top eight, a loss to Adelaide. Sydney’s run is well documented, losing their first six games, and losing only two others after that. They are twice the team at the SCG than they are anywhere else, and they have had a mixture of hard and soft games leading in. You can praise Essendon’s toughness to get here, and they won’t lie down in a final, but if they win this match it would be a bigger boilover than Gold Coast making the finals next season.
Sydney by 30.

PORT ADELAIDE vs WEST COAST
There may not be a harder fought game this weekend than this clash. Port won their last three games after being obliterated in the Derby Game, and also won the clash against West Coast at Domain in Round 16 by a handy margin. They’ve had a couple of great escapes this season, and if Boak, Gray and Ryder are on song they can be dominant. West Coast had to do it the hard way to get here, but while they just can’t seem to get the job done in Melbourne have proven they can win in Adelaide. How effective their elder statesmen can be may well be the deciding factor.
Port Adelaide by 6.
Posted by Bill Peters at 12:51 PM

Email ThisBlogThis!Share to TwitterShare to FacebookShare to Pinterest
Labels: AFL