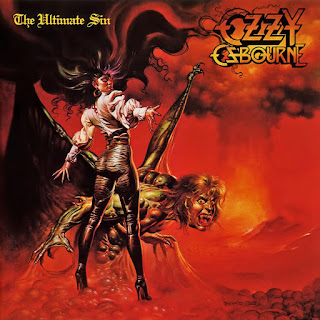 By the time the mid-1980’s had rolled around, Ozzy Osbourne has already done just about everything there was to do in music. His storied past in outlandish behaviour was also well documented. Coming into 1986 he had three best-selling solo albums behind him and the music world at his feet. As with most of Ozzy’s albums during this decade (at least) there is the usual contention over who actually wrote the songs. At least here on The Ultimate Sin guitarist Jake E. Lee and oft-collaborator Bob Daisley have been given their dues. There’s little doubt that the pair of Lee and Daisley can write great songs. Apart from the great tracks on Bark at the Moon they write some cracking tunes here. The two videos released from the album show Ozzy in full 80’s regalia, in overblown sparkly coats and jewellery and that massively teased peroxided hair, but still singing up a storm no matter what the exterior was like.

The first side of the album I feel is underrated, and is often cited by those who aren’t as keen on the album as the reason why. I think it more than holds its own. It may not have any of the most revered Ozzy songs of his career on it, but neither are they the weakest. The self-titled opening track starts off with a thumping drum beat from Randy Castillo before the rhythmic bass and guitar riff kicks in. the tempo sticks to a solid beat, energised through the middle of the song by Jake’s solo. This moves straight into the guitar riffing beginning of “Secret Loser”, one of my favourite Ozzy tracks. The faster pace pulls you along in its wake, joining in as Ozzy serenades you with “Loser, I’m a secret loser!” The Lee solo is followed by a great piece in the middle of the song where Randy plays along on his toms with barely a ripple from the guitars while Ozzy sings over the top, only to crash back into the chorus through the guitar and bass riffing back in hard and heavy. Great stuff.
“Never Know Why” settles in the same tempo that most of the album resides in, with the heavy 2/4 beat on the drums allowing Ozzy to follow the tempo vocally over the top of the simple riff structure. It sounds simple enough and doesn’t require much effort, but is effective In that it allows the guitar solo to be hero of the song while the rhythm is prominent throughout. The anti-war song “Thank God for the Bomb” follows, and uses a similar technique in the middle of the song with the tom roll followed by the guitar solo, and is just as enjoyable. “Never” rounds out the first side of the album – and really, who was doing the titles of these songs? “Never Know Why” closely followed by “Never”? Isn’t that confusing?
The second half of the album is where the real money shots reside. It starts off with the excellent “Lightning Strikes” which is prefaced by a great entry guitar riff from Jake before Ozzy gives it all on vocals. This is a quintessential Ozzy song from the era, and anyone who has seen the video for it, with Ozzy in all his glory, will know it. The lyrics sum it all up as well, and that Jake solo in the middle is just fantastic. This is followed by what is arguably the best song on the album, “Killer of Giants”. The opening guitar, bass and keys sequence, followed by Ozzy’s perfect vocal for the lyrics, before crashing into the harder edge of the song itself, is one of the best moments in all of Ozzy’s solo material. The second anti-war song on the album also brings to notice the tension that was in the air around the world at this point in the decade.
“Fool Like You” and “Shot in the Dark” complete the album in style. “Fool Like You” was the perfect song for singing at fellow students back in high school when they questioned what you were doing and how you were going about it. One of the problems of being a heavy metal nerd, there were plenty of ‘cool’ people who wanted to have a go at you. I loved singing this song at them. Jake’s solo again is top shelf. “Shot in the Dark”, co-written by bass guitarist Phil Soussan, was the first single from the album and got regular airplay on music video programs. It is a great way to finish off the album.

The question could well then be asked – why do I love this album so much when others will find its simplicity to be boring and uninteresting? It’s a fair question, and the answer will reside on the fact that I grew up with the album from the time of its release. It was one that my friends and I lived off, and it speaks as much about my youth as it does about whether the songs on the album sound simplistic or awesomely technical. The three musicians in Jake E. Lee, Bob Daisley and Randy Castillo are just terrific here, and it is somewhat of a pity that they didn’t collaborate and play together more. Music speaks to different people in different ways. I still find this as enjoyable and entertaining as I did thirty years ago.