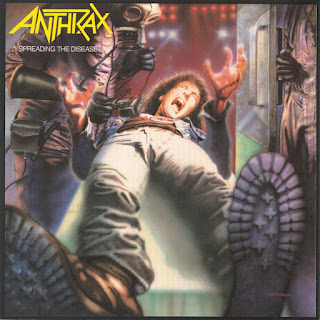 Sometimes it is hard to believe that this album was “only” released in 1985, because it feels like it has been around for a lot longer than that. After the initial recording and release of their debut album Fistful of Metal, some tweaking to the band members brought in Joey Belladonna and Frankie Bello to replace Neil Turbin and Danny Lilker respectively. Both of these changes acted to smooth out the rough edges of the thrash metal roots of the band and brought a whole dimension both musically and vocally to the group without reneging on any of the aggression and power of the music. The result of this was brought forth on Spreading the Disease, an album that began the steady climb of Anthrax as metal powerhouse.

For many fans this is still an obscure album, one that they know but without certainty. They know the tunes but not necessarily the song titles. It has its share of songs that have become classic Anthrax tracks through the years, but mostly contains songs that have not been played live since the heady days of the 1980’s and are known best by those that had the album on its release.
There are two songs on the album that were written by the original song writing team of the first album, that being Turbin, Lilker and Scott Ian. They are “Armed and Dangerous” and “Gung-Ho”, which closes out the album. Both are of the same intensity of the songs on Fistful of Metal, with the furiousness of the guitars and drums extending through any time pattern that may be being kept. The difference in the quality of the songs probably comes down to better production, the instrumentation being more studied and the vocals of Joey, whose operatic-like range gives them a completely different sound to what they would have had with Turbin on vocals. “Armed and dangerous” has the slower clear guitar beginning that works its way up in tempo and heavy feel, and while the instrumentation speeds up Joey’s vocals soar along to carry the song perfectly. In “Gung-Ho” we have a song that is not denying its roots, starting off on fire with guitar and drums, and simply not slowing down for anyone. In some ways it’s amazing that Joey can even keep up, because the pace that is set by Charlie, Frankie, Scott and Dan is exhilarating. It is a perfect counterpoint to the material of the previous album. This song has all of the same aspects, but is matured, better defined and supported by a great voice.
The base of the album is still rooted in the thrash metal elements that the band grew up with. From the start in “A.I.R.” the hard hitting drums drive the song along with Joey’s soaring vocals proving the defining improvement of the band from debut album to sophomore release. “Lone Justice” continues on the same path, clicking along at a faster pace that continues to set the tone. “S.S.C. / Stand or Fall” starts off with a very Megadeth-ish guitar riff before bursting into a similarly speed metal pace with sing-along chorus set in place. “The Enemy” is at a more sedate pace for the most part of the song, before the finale comes signalled by Joey’s scream. As a more traditional heavy metal song it still works a treat. The second side of the album bursts to life with the track “Aftershock” that pummels away with the chanting back-ups and fierce guitar riffing throughout.
The two best known songs of the album are the single “Madhouse” and the classic “Medusa”. “Madhouse” had a video filmed for the song but was largely ignored by most music video programs at the time, but it remains one of the nest known of Anthrax’s early catalogue. “Medusa” settles into the perfect rhythm from the start, and is brought to life by Joey’s amazing vocals throughout. Funnily enough, the highest note of the song, the word “Medusa!” in the chorus is taken on by Frankie Bello on backing vocals. “Medusa” too remains as one of Anthrax’s best songs, producing the heavy emotional response that their best songs do.
The most noticeable difference between this album and the following albums is that from this point there was a lot of forceful backing vocal chanting coming from Scott Ian and Frank Bello in future albums that isn’t prevalent here at all. This is an album with songs that hold a typical pattern vocal wise. That was to change after this album, and it is still noticeable today that difference in the song patterns.

This is still an oft-forgotten gem amongst the Anthrax artillery. While the style of music that Anthrax produced continued to evolve over the coming albums, this is the one that perhaps best epitomises their thrash and speed metal roots while showcasing the great talent of all of the band members. Perhaps it isn’t considered in the same light as albums such as Among the Living, State of Euphoria and Persistence of Time but for me it is still a terrific album.