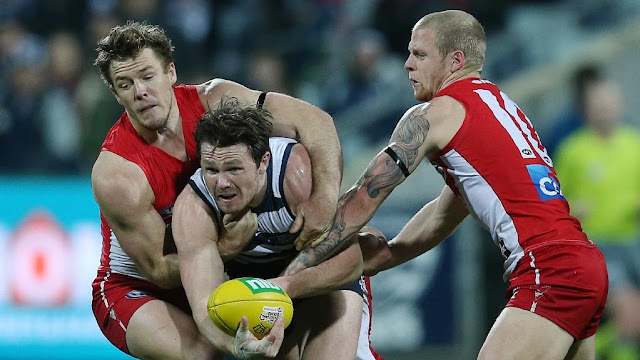 Whoever loses tonight, its a disappointing season for 2017. Geelong hasn't always been the best looking team, but when you finish second after the preliminary rounds you don't expect to go out in straight sets. That's what faces them tonight. The final quarter collapse last week against Richmond for some reason has eliminated the fact that they were well within striking distance at three quarter time in a low scoring match. The coach will have them primed to start well this week. Sydney, last season's grand finalist, has recovered from 0-6 to get to this point and only lost to Hawthorn since that streak. Theirs has been a remarkable recovery, but if they were to lose this week they will feel it has been a lost season when they should have achieved more. The big danger for the Swans is that their streak has to end eventually and perhaps fate has decreed this is the time.
Much will revolve around Buddy Franklin and Pat Dangerfield. Franklin lit up the second quarter last week against Essendon, and Dangerfield's absence from the fourth quarter last week for Geelong revealed much. So who has the advantage? Sydney's amazing form, or Geelong's second placing. If this was at Kardinia Park Geelong would have the better advantage. Being at the MCG, perhaps it plays into the Swans hands. Honestly, toss a coin and go from there.
Geelong by 6.

Last week's matches revealed the current form of these two combatants. GWS was overwhelmed by Adelaide in their final, beaten by a better team full of confidence. The Giants have not had a good back half of the season, and have struggled to dominate teams they would feel they should have. On the other hand, West Coast overcame Adelaide in the final round, and against the odds, after the siren in extra time, found a way to get past Port Adelaide in a cracking match. Having to travel two weeks in a row may be draining, but the euphoria of those two victories, and the memory of having pushed GWS all the way in their match at Spotless only a few weeks ago will give the Eagles great belief they can push their season even further.
One wonders what influence the ins and outs for both teams will have. The veterans Sam Mitchell and Drew Petrie know how to win finals, while GWS have lost Shane Mumford and Jeremy Cameron for the season. The return of Steve Johnson for his last hurrah will be a benefit, but the Giants must get find a way to get their running game operating if they are to progress. The alarm bells are ringing for Giants supporters, and if the Eagles can get a lead of substance the pressure on the Giants may bring back bad memories of last September.
West Coast by 4
Posted by Bill Peters at 9:00 AM

Email ThisBlogThis!Share to TwitterShare to FacebookShare to Pinterest
Labels: AFL