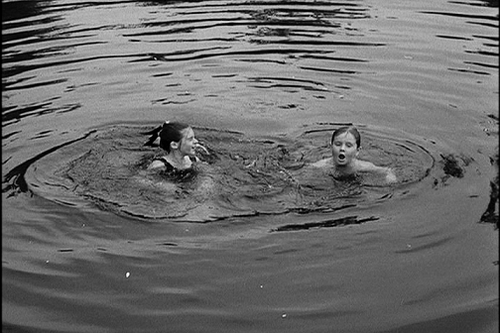 Having the ending as the beginning of the episode, only to go back and explain the story before coming to the ending again, perhaps robs this episode of any chance of maintaining your interest all the way through. Why? Well if there is to be a twist, then it has already been revealed, and all you then have to watch is the story once you know how it finishes. It doesn’t really make any sense.

The idea that there is a secret exit from a pool into another world - yes, that portal through the Twilight Zone – is fine, as is the idea behind why the children end up looking for an escape. Although the parents feel a bit overblown, just pushing too hard at that idea that they are unhappy and looking to separate. Both of their attitudes, so very demanding of the kids, just seems a tad unreal to be believable, especially when at the end 9or is it the start?) of the episode they are so worried about them having disappeared. It’s less than ideal. And the same exists for Aunt T. She seems a little too overbearing for kids to suddenly warm to instead of their own home.

Is it a complete loss? Probably not, but realistically it is not one of the better episodes of the series. And that is a shame, given it was the final one aired before the show was cancelled.