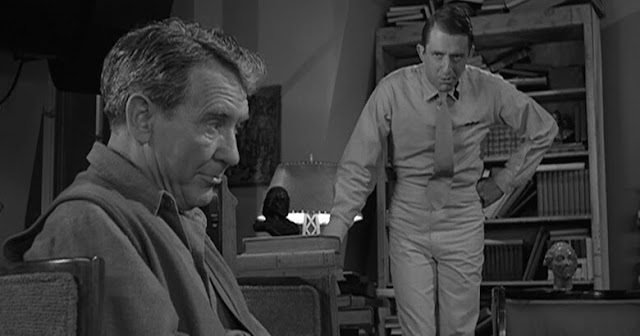 Burgess Meredith returns for another wonderful performance in yet another Rod Serling script that drips with his ironic method of weeding out those that have a lust for power and greed and become corrupted by them, and taking care of them in his own wordsmith way.

Our protagonist Wordsworth is declared as ‘obsolete’ in the New World as he is a librarian, and the word is now what the State tells you it is. He chooses to be executed on live television, but outsmarts the Chancellor by luring him to his room prior to his execution, thus sealing his fate as well as his own.

What follows is an example of some of Serling’s best writing, excellently provoking argument and answer from within such works as the Bible in the words of Meredith’s character, who has accepted his fate, while the Chancellor desperately tries to find his way out of his predicament.

This is another example of how Serling’s writing was ahead of his time, and manages to find a way to prod at those who gain and use power for their own advantage rather than for the betterment of all. Aided by the marvellous performances of Burgess Meredith and Fritz Weaver, this is an excellent episode with a serious message throughout.