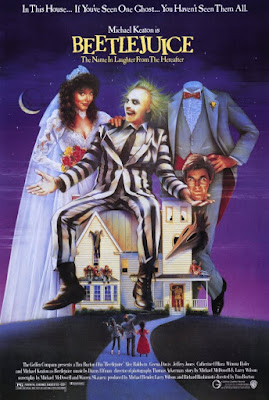 It has been a few years since I have watched this film. Probably twenty if I really think about it. And like with any film that you have not seen in that period of time, your perceptions can be completely different when you sit through it all over again.

Thankfully for me, that was not the case with Beetlejuice. The story was still as delightfully irreverent as it was initially, and the performance of the ensemble cast is still wonderful. Alec Baldwin and Geena Davis are both so naively young and witless, Winona Ryder easy to believe as the dark and lifeless daughter, Catherine O'Hara and Jeffrey Jones superbly over the top in their roles, while Michael Keaton once again cements his brilliance in any role with this crazy and jovial character. Really, you want him to win, don't you?

The kids probably didn't follow it all through the story, but they had fun, and that was the main thing.

Best Moment: The waiting room scenes are hilarious, just for the assortment of characters inside and what they've gone through to get there.
Not the Best Moment: Perhaps surprisingly, the dinner scene where the cast are forced to sing and dance. Reasonable enough, but the fact no one is scared off by it is a little unbalanced.
Times Watched: First time in probably 20 years. Approximately 10 overall.
Rating: Still a more than enjoyable, if quirky, comedy. 4/5
Posted by Bill Peters at 6:13 PM