Revisiting The Twilight Zone: S02 28: Will the Real Martian Please Stand Up? 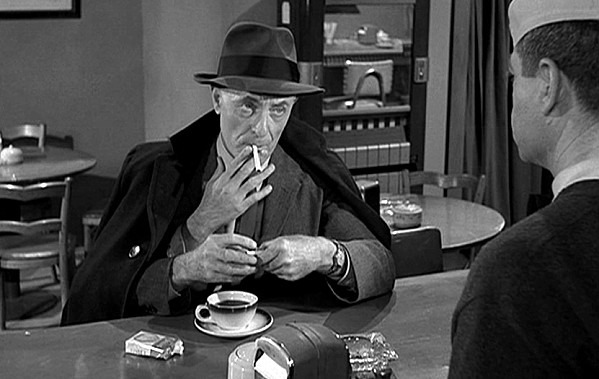 Revisiting The Twilight Zone: S02 28: Will the Real Martian Please Stand Up?

The old closed room detective story of trying to work out who the murderer is takes on a distinctly Twilight Zone feel in this episode, where a bus load of people are stranded by snow in a diner. The problem is, the bus driver insists there was only six people on the bus, but there are seven people in the diner.

Joined by only the owner behind the counter and two state troopers, the episode revolves around the usual plotline of moving around each of the people in the room, and trying to establish who they are and what they were doing on the bus. The troopers had been investigating a possible sighting of a downed flying saucer, and it is believed that one of the people in the diner is in fact the pilot of that vehicle. While it is mildly effective at throwing the suspicion at many of the occupants, it is the strange goings on just before they all re-board the bus to continue their journey that causes the most alarm.

The conclusion and the twist at the end of the episode folds neatly into the story as told, and the fact that a detective story has been enveloped by a science fiction tale makes for a satisfactory finale.