APJSC Under 11 Reds: Round 8 vs Albion Park Yellow 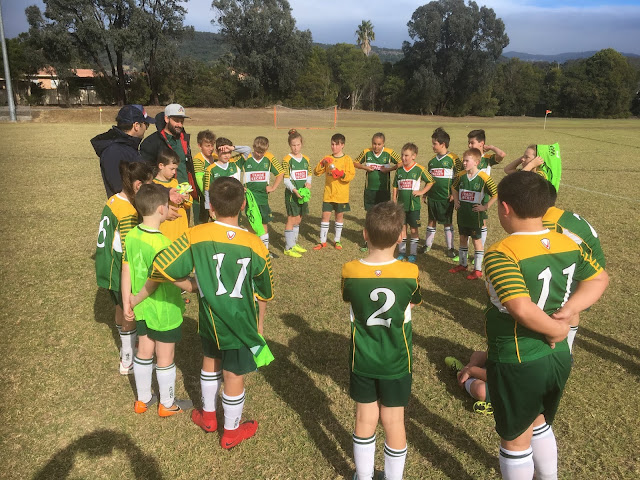 On a much more typical winter day for junior soccer at Terry Reserve, the Albion Park Junior Soccer Club Under 11 Reds took on the Albion Park Yellow team for the second time this season, with both teams keen to show they had improved since the first time they clashed, which was in the first match of the season when the Reds had come out on top with an 11-6 victory. No doubt the Yellow team was seeking revenge for that result.

With a howling southerly blowing to cause mayhem on the pitch, both sides made a tough start to the match. The ball spent a lot of time in the Reds defensive half but the back four held firm, and despite a couple of early shot in attack the ball was having a difficult time getting into the right areas. Ky Van Helden had one nice shot at goal that was saved, while Jack-Ryan Eberwein also unloaded a bomb was the right that flew wide of the top corner. For awhile it looked as though it was going to be a scoreless first half, before Belle Kadwell found a space working her way from the back and through the midfield, where she then passed perfectly to Ky who beat one defender before dishing off the pass to Jack Tate who continued his great form from last week by beating the keeper and allowing the Reds to take a 1-0 lead. 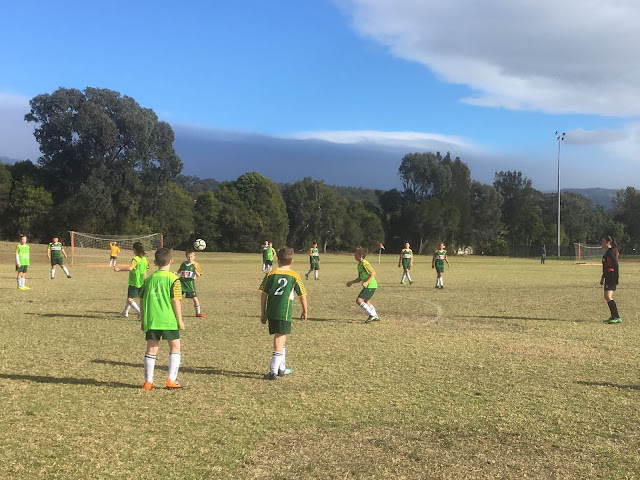 Perhaps this led the Reds to relax a little, because not for the first time this season a team went from defence to attack to goal in a matter of moments. An attack on goal went to the opposition keeper who quickly got the ball moving while the Reds attack and midfield virtually stopped. This didn’t help the back line, but they too didn’t recognize the danger early enough and the whole laxness of the team meant that the Yellow’s scored a terrific length of the field goal with barely an effort made in stopping it. The score was 1-1 and in the end the halftime whistle couldn’t have come soon enough.
The first half of the second half proceeded much as the first half of the game had done (that’s a mouthful). Not much was happening up forward for the Reds, while the backline had a few to clear out. Eventually Josh Peters at centre back got a good foot on a ball to find Claire Kadwell in the midfield, who made a great pass to Noah Black at right striker. Noah made a great run diagonally back into the centre of the field, beating three defenders before planting the ball in the back of the net, and restoring the lead for the Reds at 2-1. Unfortunately this didn’t last long, and some sustained attack by the Yellow team saw them have three corners in succession, and the third one found Jack-Ryan’s leg which changed the direction of the ball perfectly out of reach of his goalkeeper and fellow defenders and found the net to have the game levelled up at 2-2.

The heads of the Reds team had dropped a little and the next goal was crucial, and there was a sense that both teams knew it. Certainly the coaching staff on the sideline knew it. A good period of play saw the Reds get a couple of chances in their attacking zone, and finally a great corner taken by Noah found the number one striker Ky unattended and he slotted the ball to get the Reds back in front again with a 3-2 lead. 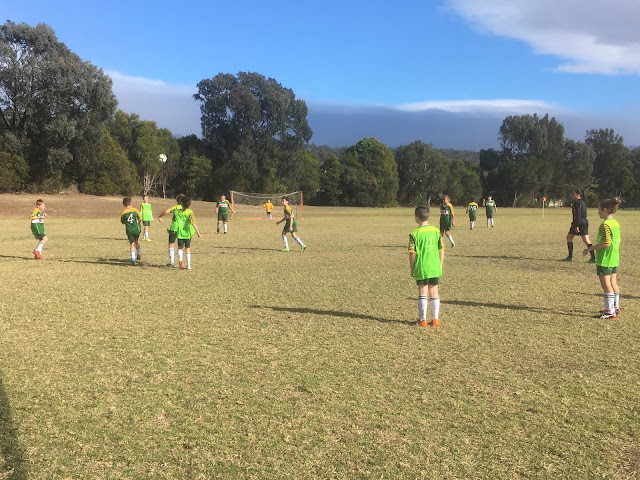 The Reds now began to run over the top of their opponents, again through their better fitness and perhaps their belief. Ky had three consecutive shots on goal from runs down the left and winding through defenders in the middle, only to have all three saved by the goalkeeper. But the tidal wave was becoming overbearing. Belle again made a tough hard run through the midfield to get the ball to Noah who ran and jagged past three defenders before leaving the keeper guessing the wrong way and crushing the ball into the net for his second goal and extending the lead to 4-2. From the kick-off the ball was quickly stolen and moved downfield, where Ky made no mistake with his strike on this occasion to bring up his second goal and leave the Reds with a comfortable lead of 5-2.
With tensions easing on the sideline the players were encouraged to exhibit their wares, and the wave of attack kept coming. In the dying minutes Jack-Ryan made a play for goal of the year with a crashing right boot from out wide on the right that just failed to find the goal, while Brock Young also made an excellent run and shot in from the left that was just parried away. Finally a great tackle and pass from Brock was taken by Claire who beat one and passed infield to Josh. Josh then ran and beat two before passing perfectly onto the unmarked Ky’s boot who made no mistake for his third goal and a final scoreline of 6-2 to the Reds.

It was a tough day to play soccer, and hard to keep motivated in the game when you were on the field. Noah had a terrific second half after spending the first half in goals, and is beginning to show a great combination with Ky. Jack was again busy in the first half before moving back to keeper in the second half, while Jack-Ryan is showing himself to be a dominant player around the park.

Still, to me at least, the reason this team managed to win today was to our three girls, Belle and Claire, and Zoe Middleton. Belle and Claire once again barely stopped running for the whole match, and when a ball fell loose into a gap it was they who seemed to be first on the scene to grab it. Belle’s work at the back was just fantastic, while Claire was tireless doing double duty up forward and then rushing back to help the mid-field. Similarly, Zoe continues to take on boys twice her size fearlessly, never afraid of getting in and trying to steal the ball off them, always making a second attempt when necessary, and today also got away several great passes down the line to her teammates. I’m not dissing the boys, but each week these girls are just amazing and today especially were instrumental in ensuring victory.

Player of the Day though deservedly went to Ky, who looks to be a natural striker. He gets double and triple teamed once the opposition see how dangerous he is, but he doesn’t let that stop him. He was great again today and deserves his award. 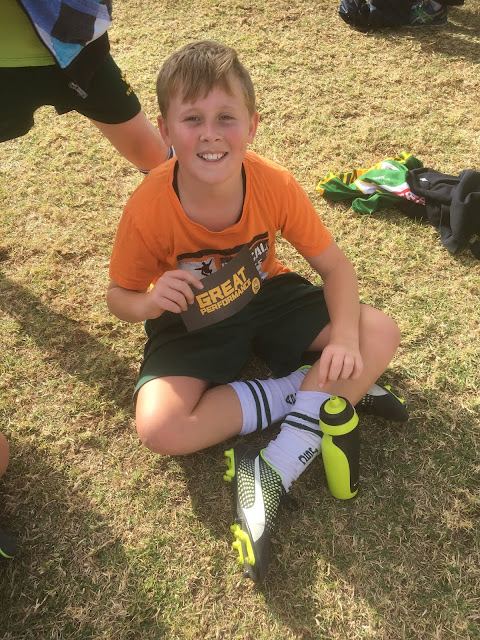