APJSC Under 11 Reds: Round 11 vs Coniston Gold 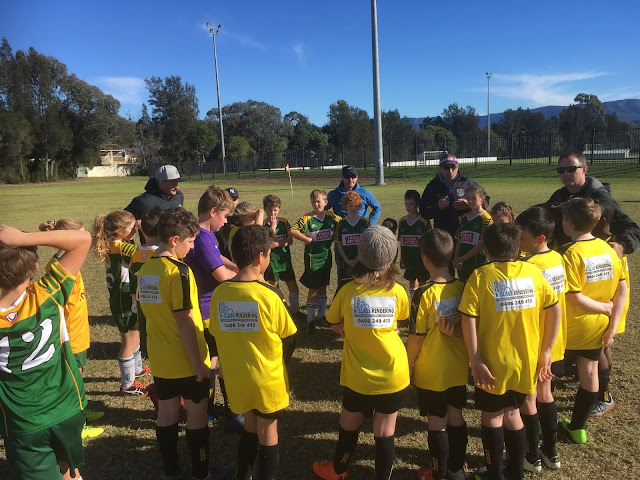 A rematch against remembered foes in Coniston Gold for the Albion Park Soccer Club Under 11 Red team was what was set for today, and while the talk was of a rough and tumble match what was closer to the hearts and minds of the players was the need to improve on last week’s performance and ensure they did not start slowly as they did in that match.

The opening stanza was quite even, with both sides feeling out where the breaks in the defence might be. Indy Middleton was a different player today from last week, a ball of energy as he chased hard and through his opponents in the midfield and created the early spark that got the Park team moving. After a couple of early breaks, the Park defence shut down the two dangerous players from the Coniston team and began to work on a way to get to their own goalmouth. A couple of good plays broke down at the vital moments, as Jack Tate looked in great touch once again. On at least three occasions he wound his way past multiple defenders, only to just go a little too far before disposing of the ball and instead had it stolen off him. He showed however that there were ways to get through the Coniston team. A couple of balls went wide for goal kicks, and the Park attackers began to get wise, and were chasing hard once the kick was made. Eventually Ky Van Helden latched onto one of these goal kicks and crashed it back past the goalie to open the scoring and a 1-0 lead for the home team.

Last week’s problem was that the team fell asleep once a goal had been scored and allowed their opponent to get back into the match. Thought they were more switched on this week, they still allowed the ball to get past the defensive line, and it only took this to happen once for their forward to get a good strike in and put the ball in the back of the net and level the scores at 1-1.

Forced to work hard once again with scores level, the Park kids did begin to get the larger amount of possession and in their opponent’s half of the ground. Still pressuring the goal kicks as hard as possible, one again fell loose as Zali Middleton tried to kick towards goal. This ball was boomed back out of the goal square by the defender that was twice as big as Zali and three times as wide, but she managed to get her right leg in the way of it, and it instead rebound at speed straight into the back of the net for a great goal for Zali, and Albion Park regained the lead at 2-1.

The ball was being kept in one half of the ground now, thanks in part to the great defensive line of Brock Young, Josh Peters and Belle Kadwell, with help from the mid-field of Indy and Jack-Ryan Eberwein. Claire Kadwell was making great runs up front down the left wing and managed to get a couple of shots off that were picked up by the keeper. One of these was another attacking raid that was cleared by the fullback, which went straight towards Jack-Ryan who was positioned at right back, only two metres into the Coniston half. He had time to steady, but instead he went for the no-touch booming kick straight back at the goal mouth, and as 18 payers looked up with gaping mouths, the ball rose to a great height, and the fell back to earth, just over the top of the keepers reach and just under the cross bar and into the back of the net. It was an astounding goal, one that no one who saw it will ever forget. It allowed the Park team to go in at half time with a lead of 3 goals to 1.

The second half was punctuated by three terrific pieces of play. Jack-Ryan headed back into goalkeeper, and after a great break down the left the Coniston striker had a clear shot at goal with only Jack-Ryan on his own. The powerful shot came in, but Jack-Ryan was having none of it, and made the save of the year so far. Inspiring stuff.

At the other end there were more chances coming, with Ky continuing to attack hard, and being well supported by Noah Black on the right who had come out of goals and was making himself known to his opponents. Down the left Zoe Middleton was just fantastic again, running hard and making at least four perfect passes down the sideline for Josh and Ky to run onto. It was great to watch. Noah fought hard to be awarded a free kick, and then a great set piece between Noah, Ky and Josh was finished off by Josh for his first goal of the game and a 4-1 lead. Five minutes later Zoe had fought hard and forced a corner for her team, which Josh took and calmly curled the ball from the left corner into the goal where it beat the keeper for his second goal and a 5-1 lead. Three great pieces of play that typify the best this team is offering when everyone is switched on and playing at their best.

A late goal by Coniston was some consolation for them, but the park kids finished up with a handsome 5-2 victory to help make up for their first loss last week.

Indy Middleton and Jack-Ryan Eberwein had one of their best ever games, both were busy throughout. Zoe Middleton again was just terrific and was backed up by Zali Middleton who was fast and furious up forward. Belle and Claire Kadwell were as busy as always, and Noah Black, Jack Tate and Ky Van Helden did well with their opportunities. Josh Peters claimed it wasn’t one of his best games, but again when given the chance in the midfield the team seemed to click better with his great runs and passes.

Still, above all this was Player of the Match Brock Young, who did as he does every week. He is great in defence, he clears the ball when needed and he runs hard into position when the team needs him to move the ball upfield. He laughs at his own errors but always makes up for them. A well-deserved award this week. 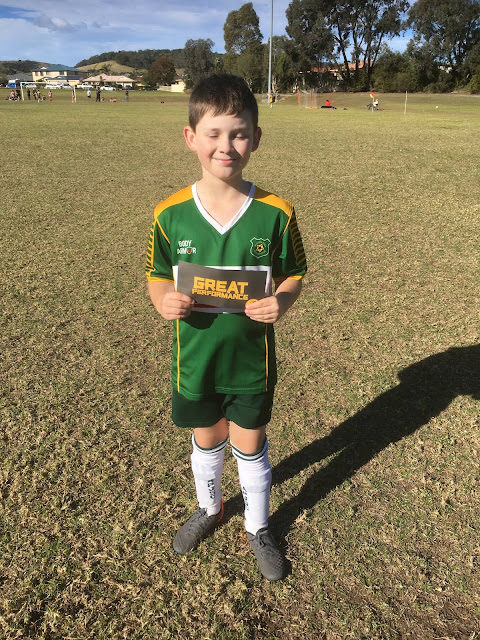 As it turns out I managed to get Josh’s two goals on video, mostly as they were from set pieces. Have a look at both of them, especially the set piece from Noah to Ky to Josh to score.