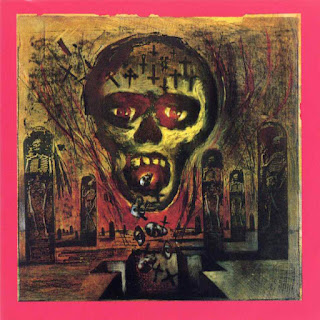 I can totally understand why Slayer fans who came into the band all the way back at the beginning in 1983 have problems reconciling what is offered on Seasons in the Abyss. Where you have been raised on a diet of pure thrash and speed metal that the band delivered on their early albums, coming into this album must have been a slightly off-putting experience. On the other hand, for those that found Slayer at about the time this was released, it could be seen as being a liberating event. This is where I met Slayer.

That it took me so long to get around to listening to Slayer is not only a bit surprising it is also disappointing. I should have been listening to Slayer a lot earlier than this, but as none of my friend group with whom I shared all of our album purchases with had found their way into the band either, none of us had a reference point. Don’t get me wrong, I had heard snatches of songs at record stores and on metal programmes along the way, but had never actually made the connection to go out and buy their albums. As a result, it wasn’t until a few months before this album came along that I finally started divulging in the band, and it was this album that was the first of theirs I bought and obsessed over.
This is where the two sides of the fan debate will part, and maybe I feel a little fortunate that I was able to take in and love this album without the past albums intruding to colour my judgement, because if I had I too may have felt that this album changed everything that Slayer had produced before. Yes, I’m talking about the speed and ferociousness of the songs in general. It’s not the case for the whole album but there are certainly moments where the groove and riff sets in rather than the pure speed or high level thrash that dominated the band’s earlier albums. “Dead Skin Mask” and “Seasons in the Abyss” are the two high profile songs on this album that do this. They are both terrific songs in their own right, but they are not like anything that came from their early days. Perhaps the best example on the album is perhaps my favourite song, “Skeletons of Society”. It’s a simple groove and riff, it tends to plod along, but I love the song and the lyrics. It mirrors “Expendable Youth” though the soloing goes off on its own track as well.
Still if you want thrash you’ve still got it here. Album opener “War Ensemble” is a killer track, set off on the back of the remarkable drumming of Dave Lombardo who ignites the song at a fever pitch but is challenged by the riffing of Jeff Hanneman and Kerry King as Tom Araya somehow plays the bass at this speed while spitting out the lyrics in the same speed. “Blood Red” and “Spirit in Black” continue in a similar vein, as do “Hallowed Point” and “Born of Fire”. Another favourite is “Temptation” with dual vocals tracks that Araya had recorded separately (one the way he wanted to sing it, the other the way writer King thought it should be sung) that were then put together on the song when it was thought it worked. And it does!

In a year where so many fantastic but ever-changing heavy metal albums were released, you can’t deny that this one is still at the top of its game. All four band members are on fire here, Hanneman and King’s amazing guitars brought to the fore with Araya’s bass and vocals pushing the limits and Lombardo’s drumming smashing the silence and at times the sound barrier. While we will always have the raw majesty of Show No Mercy and Hell Awaits, and while Reign in Blood will always stand as a pinnacle, and while South of Heaven still ranks alongside these other albums, this album shows that thrash metal can show a maturity without overly compromising its principles. As I said initially, I can understand where those early fans are coming from with their criticism of this album, and find I am thankful in this instance for the fact that I was able to fall in love with this album for the right reasons and not just be angry about any perceived changes in the make-up of the songs from their earlier vintage. This still ranks as one of the greats.