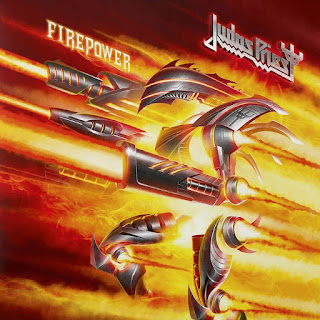 In an world where the early leaders of the heavy metal art form are ageing and deteriorating such that not only do band members change but the music itself has evolved outwardly since their earliest incarnation, it makes sense that many people may question the arrival of new music from these bands. What do they have to offer in the current music environment, and how could it possibly be relevant to either long time followers or possible new recruits who may find it is obsolete? These are thoughts that it would not be unfair to have running through your head as you approach the 18th studio album released by metal stalwarts Judas Priest, and yet by the time you have listened to Firepower on a couple of occasions most will appreciate that there is still plenty of firepower left in the old war chest.

When the previous album Redeemer of Souls was released it was a positive feel. I was perhaps relieved rather than completely excited. From the get-go here though I was excited. The first taste of the album dropped a week or so before the album arrived, and it had everything that you could have hoped for in a Judas Priest song. And the when I first got the album, it was… well, not mind blowing as such, but it was somewhat unexpected as to how much I enjoyed it.
The best part for me is that I went in with no expectations, but got plenty in return. You won’t get supersonically fast songs, you won’t get heavier than heavy songs, you won’t get vocals and screams that raise the roof. What you do get are pacey songs with great riffs and solid thumping drum work with those great Halford mid-range vocals throughout. The songs are catchy, and the structure works terrifically. They are not as simplistic as “Breaking the Law” or “Living After Midnight”, and they are not as bombastic as “Painkiller” or “Leather Rebel”.
This album hasn’t left my rotation since its release almost two months ago. It gets me in right from the start with the great riffage of “Firepower”, “Lightning Strike” and “Evil Never Dies”. “Firepower” is a brilliant opening song, clattering along, and followed by “Lightning Strike” with great guitar work from Glen Tipton and Richie Faulkner and dual vocal work from Halford creating another great singalong song. Then we fall back into a more traditional heavy riff, complemented by super drumming from Scott Travis again, that keeps the brilliant vibe of the album going. These three songs make for a superb opening to the album. The rest of the album too is terrific, with songs such as “Rising From Ruins”, “Flame Thrower”, “Traitors Gate” and “Sea of Red” all of different tempo but no less enjoyable than the rest of the album.
Many of the older fans may be looking for the classic Judas Priest on this album, and younger fans may be looking for something completely different. For me I could not have asked for anything more from this album, from this band, at this stage of their career. All of the elements that make Judas Priest such a timeless band are here, even if they may be subtly different. Halford’s vocals continue to amaze, and they sound as powerful as ever. He doesn’t go for the heights anymore, which more than anything else makes it easier to sing along to the songs on this album. Tipton and Faulkner are still magnificent in the art of guitaring, with Faulkner in particular really coming to the fore on this album. Hill’s bass work can still be completely underrated but once again here his playing is compulsory in bringing the low end to the songs. Topping it off is Travis’s drumming which continues to be the benchmark for the band, perfectly timed and adding flourishes when there is a gap to fill.

Many may write this off as too tailored or too predictable or not relevant in the modern age of metal, but I would counter that this is the perfect release for this time. Whether or not it was inspired by the classic Judas Priest albums of the 1980’s, the sound has a tie to that era, but without trying to transplant or copy it. This is a modern album with relevance to the band’s past, and by doing so creates exactly what the fan wants. There can’t be another Defenders of the Faith or Painkiller, but for 2018 this will suffice nicely.