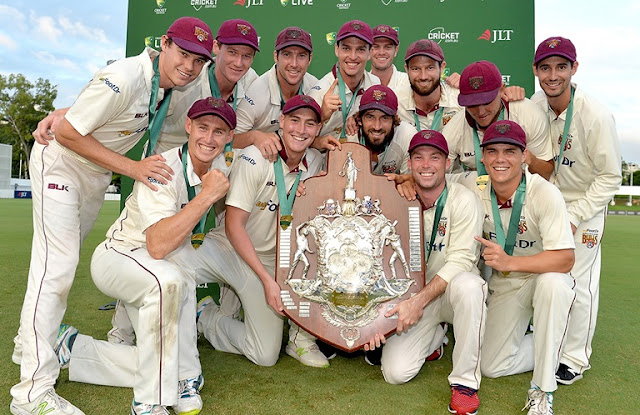 The Sheffield Shield Final has become irrelevant and obsolete in the cricket calendar and should be removed from the summer schedule. This has been a recording.

Once again we are at the end of March, with AFL, NRL and Super Rugby dominating the local match attendance prerogatives of families. We are hearing about the Dragons and the Eels (for different reasons), about GWS and Richmond, and of the Reds surging under Brad Thorn.
Meanwhile in Brisbane, the once imperious Sheffield Shield competition was finishing in a damp squib, a final that few people knew was happening let alone what the result may have been. That result came yesterday afternoon, when a contrived finish due to losing so much play to rain saw competition leaders Queensland win the final against Tasmania by nine wickets.

What began back in 1982/83 as an effort to revive the fortunes of the domestic four day competition, to give it a glamorous finish and a taste of Test cricket with a five day final, has become even more irrelevant than the competition itself in the modern game. In that match, hosts and table leaders Western Australia was beaten by the visiting New South Wales team, breaking a drought for the Blues of 17 years. Only four times in the following 35 seasons has the visiting team actually won the Final and thus the Shield itself – Queensland over Western Australia in 1996/97, the reverse result in 1998/99, and New South Wales twice over Queensland in 2002/03 and 2004/05.
The leaders and home team have won 21 times, often as the visitors lost trying to make something of a game that was out of reach, and there have been 10 draws which resulted in the top team winning the Shield anyway.
At times it has been ludicrous. In the 2003/04 final in Melbourne, Victoria scored 710 batting first in 212 overs, ensuring they couldn’t lose but killing the match as a contest. No doubt boiling over this, two years later in Brisbane the Queensland team responded to Victoria’s first innings of 344 by piling on 6/900 before finally declaring with Jimmy Maher (223), Martin Love (169), Shane Watson (201 – retired hurt of course) and Clint Perron (173) cashing in. The folly of there not having to be a result for one team to lift the trophy has often been the cause of the Final being a complete waste of time.

In recent years the domestic four day and one day competitions have been forcibly removed from the public’s eye due to the constant expanding of the International calendar, and the burgeoning money pot that is the BBL competition. The one day competition now runs for three weeks in October in the shadow of the football codes finals, and if you blink you will miss it completely. The Sheffield Shield retains some relevance running up to the first Test matches of the summer when we see most of the International players having a hit or a bowl as a warm up session, but once the Tests start it moves back into a second class system, halting completely for almost two months to ensure it does not interfere with the T20 form of the game.

Despite having seen some fantastic finals in the past – the one wicket victories of New South Wales over Queensland in 1984/85 and 2004/05, and South Australia’s stonewalling draw against Western Australia in 1995/96 - the game rarely lives up to its standing as the crowning jewel of the domestic season. In most cases it only delays the victory celebrations of the top team on the table for a week. In an overcrowded and overlapping season, and with the football codes in full swing by the time the match is scheduled, now is probably the time to go back to the ‘first past the post’ winner that served the competition so well for its first 90 seasons. Sadly, the best excuse for this happening is that so few people would actually miss it.
Posted by Bill Peters at 9:05 AM