APCC Under 11 Golds: Round 1 vs Oak Flats Blue

The Albion Park Cricket Club’s Under 11 Gold team started the 2017/18 season on Saturday, despite the rain that has been waiting eight months for this particular day to come around. Despite the greasy conditions the match began on time, with Oak Flats Blue winning the toss and electing to field at Albion Oval Middle.

The new laws set in place for under age cricket had their first run on the day, with opinions varied on whether they were good for the kids or not, as well as for the umpires and scorers. In a season where every batsman will face the same number of deliveries no matter how many times they get out, it is not cricket at its purest but will give every chance to have time at the crease each week. Four penalty runs are awarded to the other team for each wicket they take which also tends to make it hard to know who is in front in the game until five minutes after the game has finished. Of course, the result ‘doesn’t matter’ as long as everyone has a good time – but try telling the kids that! It also makes it difficult to report on a game in a traditional form.

The Golds made 93 runs from their 20 overs, losing 8 wickets in the process. Lucas Brown hit the first boundary for the team for the year in his 7 runs. His opening partner Max Sciberras made 2 and showed good intent immediately, and the pair ran between the wickets well. Charlotte Rodda play a couple of good strokes, one through the leg side and one through mid off in her innings of 3. Young Bodhie Rodda, playing his first game of organised cricket showed he was not overawed, and although he didn’t make any runs off the bat he ran well for his partners, and was also unfortunate to receive two of the best balls of the day from his opponents which would have gotten out most batsmen. 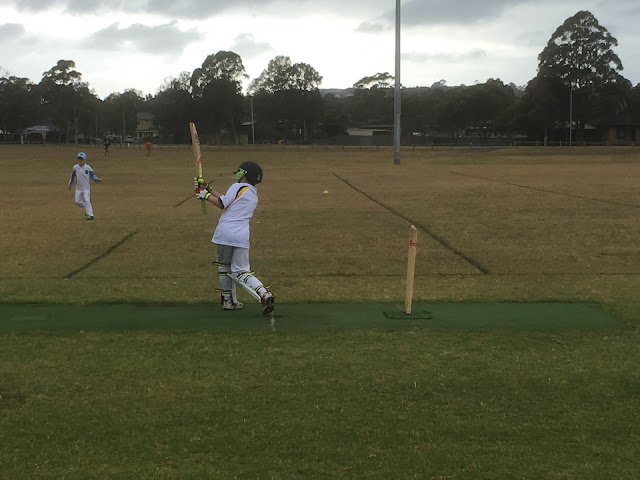 Blake Ison played the most flamboyant innings of the day, adding seven boundaries to the total in his unbeaten innings of 29 – though if the LBW law was in effect he would have had a couple of wickets added. He was most impressive in keeping the majority of his strokes along the ground to the boundary, and he ran and called well. Good stuff from Blake. Kane Rex also played well, hitting some shots that couldn’t penetrate the field, but finished with 2 runs nonetheless. Josh Peters was a bit ambitious in his strokeplay, looking at the sky more than the ball but still managed to score 7 runs.

Oak Flats Blue made 102 runs from their 20 overs, while the Golds managed to snare 3 wickets. Blake Ison bowled almost the perfect opening over to the innings, a wicket maiden to start and swinging the ball nicely away from the batsmen. By his fourth over he was a little tired and wayward but his first spell for the season showed how much he has improved already from last season, taking 1/8 from four overs with only two no balls. Max Sciberras first over was terrific, straight and full, but he tried a bit hard in his second over and was short and wide as a result. His two overs finished with 0/15, but he also kept wickets for the second ten overs, and did it with aplomb, only allowing two byes and looking confident in the role. Bodhie Rodda and Charlotte Rodda were nervous about their bowling, and started that way. However, the difference between their first overs and their last overs was startling, with both beginning to get the ball straighter and fuller each time. With a few more training sessions and games under their belt they won’t know themselves. Bodhie finished with 0/19 from three overs and Charlotte 0/23 from her three overs.

Kane Rex bowled an excellent first over, and while his second over was a bit ‘licorice allsorts’ he did bowl and excellent inswinging delivery that bowled one of Oak Flats’ best looking batsman, and his celebration of the wicket was even better than the delivery. He finished with 1/16 from his three overs. Josh Peters first over was only average, but he redeemed himself in the rest of his spell. He beat the bat almost constantly, and if only he would listen to his coach – or his father for that matter – and bowled at the stumps, he would get many more wickets. His three overs cost 1/6. Lucas Brown kept wickets for the first ten overs, and proved very adept at throwing off the gloves to chase and throw the ball, but not so much in putting the gloves back on. He did an admirable job, letting through only 3 byes. His first over too was excellent, right on the spot, but perhaps tried to bowl too fast off too long a run off in his second, with his two overs coming to 0/10.

With penalty runs added to both teams for the wickets taken, the final score was Oak Flats Blue 134 to Albion Park Gold 105. It was a good first outing for the team, and once they have been run ragged at training this week on the skills knowing when to throw at the wickets and how to back up said throws, then hopefully they will be in good form for next week’s match.


Scorecard: Round 1 Under 11: Albion Park Gold vs Oak Flats Blue
Posted by Bill Peters at 11:27 AM