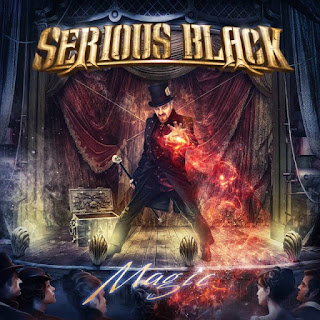 It is somewhat out of the ordinary in this day and age for a band to be releasing new albums in consecutive years. Probably not so much from new young bands, whose first album comes out based on material they have been gigging around for years, and suddenly they find they have a mountain of songs they want to get down and get out to the masses. That was the ‘old’ way which rarely seems to reproduce itself in the current music industry. Such then is the surprise about Serious Black’s output since their formation in 2014, ostensibly a combination of musicians from several backgrounds and bands coming together to do some new material. With Magic the band has released their third album in as many years.

There is nothing ground breaking here. They aren’t reinventing the wheel of the power metal genre in any way. But I do think it is fun. I have had this on fairly constant rotation for the past week since its release, and I haven’t tired of it, which has happened to countless other albums of bands I have picked up along the years in this same musical category. Granted, there are times when I think I am listening to the same song over and over again such can be the similarity of the song structure or keyboard riff of vocal properties involved. Like I said, this isn’t the stuff that is meant to create the Next Big Thing in music. But it is harmless enough, and everything fits together nicely. The rhythm section of the wonderful Alex Holzwarth on drums, Mario Lochert on bass and Jan Vacik on keyboards provide the solid base on which the songs are formed. Any album that Alex plays on is automatically better for his presence, the crispness and perfection of his drumming is always a highlight. The dual guitars of Bob Katsionis and Dominik Sebastian are given their freedom to both harmonise together and then have their place with various solo spots throughout the songs, all of which are impressive enough to keep the songs heading in the right direction. Urban Breed’s vocals emit all of the right moves without being extraordinary, but they suit the songs the way they have been written.
So what is it that makes this album what it is? I know it has been bagged in some quarters of the reviews I have read, with some of those people feeling it is either selling out of too childish or without any template to make it a serious album (no pun intended). I would certainly say that if you don’t have a penchant for power metal then you will have trouble finding anything in this release, because not only does it have this in spades, but it also hails back in some way to the hair metal designs of the 1980’s scene, with touches of Europe and Def Leppard and Dokken and other such bands throughout. It’s not an acquired taste as such, more of an album that if you have a certain range of influences you will be able to get the most out of it. Without that correct range of musical tastes it will probably not appeal to you at all.
For what it is worth, I like this album. Since the first time I played it, I enjoyed it. I can have it on in the background to whatever I am doing, and I enjoy having it on. And I think that is where both the beauty and the problem of the album lies. Those going into it looking for majesty and brilliance of the highest levels are listening to the wrong album. This isn’t what this is purporting to be. And I think it is the kind of album that you either like immediately or dismiss immediately, because if it doesn’t catch you on those first couple of listens you are going to cast it aside and go looking for the next album in line. For me, I enjoyed it immediately, for all of those power metal basics that you either love or hate. Apart from Alex’s drumming, the guitar riffs are good, the solos are generally excellent and Breed’s vocals do their job. At an hour in length it is probably a bit long, exacerbated by the similarity of the tracks, and perhaps a more 1980’s album length of 45 minutes would have been appropriate.

In the long run, if you are looking for the next power packed album along the lines of Gamma Ray or Helloween, then you won’t find that here. On the other hand, if you are looking for an album that keeps you entertained for an hour while you are driving the car or at work or in the garden, then this should fit the bill. You might move on to those other bands rather quickly after listening to this, but listening to this won’t be a disappointment if you accept it for what it is.