The Web of Spin Traps Australia in Sub-Continental Mercy 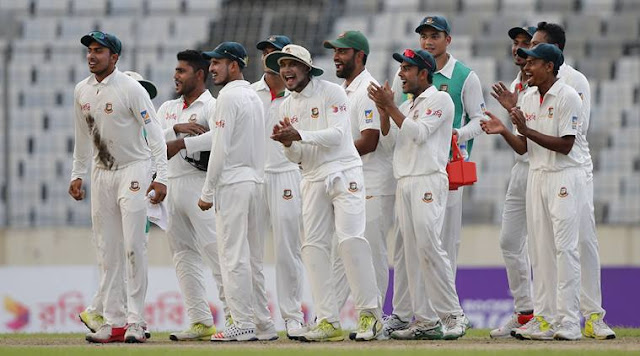 There have been some messy days from Australia in Test cricket in recent years – let’s not start to mention them as they are far too painful to recall – but Day Two in Mirni would rank highly within any list that you could form. From the moment skipper Steve Smith charged down the wicket only to have his leg stump knocked over, Australia was on the back foot and was never really able to recover. On the other hand, Bangladesh took their chances, kept the pressure on the Australian batsmen, and then finished off the day with positive batting that sees them firmly on the front foot in this 1st Test.

Australia began at 3/18, and didn’t take Einstein to realise that they needed their captain to, once again, step up and lead his team out of trouble. His unfortunate dismissal in just the third over of the day, having seamlessly added 15 runs in that time, was the boost that the home team needed, and the one Australia feared. Now it was up to the young brigade to prove their worth and try and keep Australia in the match. In this respect, Matt Renshaw, Peter Handscomb and Glenn Maxwell all showed good intentions. Despite the ball playing tricks from the spinners, each of the three handled themselves well. Renshaw never really looked as though he would break the shackles, but he kept plonking his front leg down the wicket and took care of any loose balls that came his way. Both Handscomb and Maxwell looked at ease in the cauldron, both working singles through the field and looking for the boundary to anything too short or too full. However, all three fell to mistakes. Renshaw finally edged behind to a straight ball for a well-made 45, Handscomb succumbed to a faster ball that pinned him to the stumps for 33, and Maxwell ran past a ball that spun well past his bat to be stumped by a large margin for 22. While each made the start, once again none could go on with it. At 20 years of age, Renshaw is learning a lot about playing spin bowling as an opening bat. He just needs to keep fighting. Handscomb’s technique of playing almost everything within a few centimetres off his stumps is indicative of a young man with a great eye and great reflexes, but he looks prone to being dismissed LBW a LOT with it. Maxwell again looked serene at the crease, but again fell to a shot that looks ugly and before he had contributed enough. If he can ever hold himself back from the, he could still be unstoppable as a number six.

Throughout this, Bangladesh’s two main spinners, Shakib Al Hasan and Mehidy Hasan Miraz were magnificent. Shakib finished the innings with 5/68 off 26 overs, and makes him the first to take five wicket hauls against all current Test nations (which will change shortly once Ireland and Afghanistan begin their matches). Added to his 84 in the first innings he is again proving why he is considered to be the best all-round cricketer in world cricket. His partner showed that his efforts against England 12 months ago were no fluke, finishing with 3/62 from 26 overs. It confined the rest of the attacks to very short bursts throughout such was their dominance.

Matthew Wade’s further failures as both wicket-keeper yesterday and batsman today (dismissed for 5) continues to provoke enormous pain for Australian cricket supporters. Perhaps he will redeem himself in the second innings. However, at 8/144 Australia looked like giving up a century lead. Indeed, if it had been in India with that team it would certainly have been true. But Pat Cummins and Ashton Agar are made of sterner stuff, and the 73 runs that Australia’s final two wickets produced have at least kept them in this match. Whatever the reason was that Agar was selected for this tour in front of Steve O’Keefe for, he not only repaid the faith with his bowling yesterday but proved how valuable he is to the lower order. He scored two Sheffield Shield centuries last season, but neither was more valuable than his innings today of 41 not out. Along with Cummins, whose 25 runs continued to prove his qualities, the two faced 187 deliveries against the attack that had ripped the top order apart. It is the steel Australia needs in its lower order. In reducing the eventual deficit on the first innings to just 43 runs when it could have been greater than one hundred, it has kept their team in with a chance to save this match.

Some of those good feelings will have been wiped away by Bangladesh’s start, racing away to 1/45 at stumps, and a lead of 88. Sarkar’s dismissal in the second last over of the day was fortunate and critical – Agar topping off a great day for himself. Tamim has looked at ease, and willing to take on the Australian bowling. With Kayes, Rahim. Shakib and Shabbir to come, any lead over 250 will be a tough chase in the fourth innings, and a lead of 300 pretty much a winning one. Day Three will be the Test for the Bangladesh batsmen, to see if they can dominate an Australian attack in their home conditions, and be able to pressure them into submission.

For Australia, another average day with some positives has left them on the precipice. Not only must their bowlers keep the runs down and dismiss their opponents cheaply, then their batsmen must be able to fight in conditions they are not suited to in order to chase down whatever total is set. The remainder of this Test will show us a lot about their opponents, but also of how much this team believes in itself and its individuals abilities to combat their opponents and the conditions.
Posted by Bill Peters at 8:00 AM