Points Shared on Day One as Bangladesh Buck the Trend 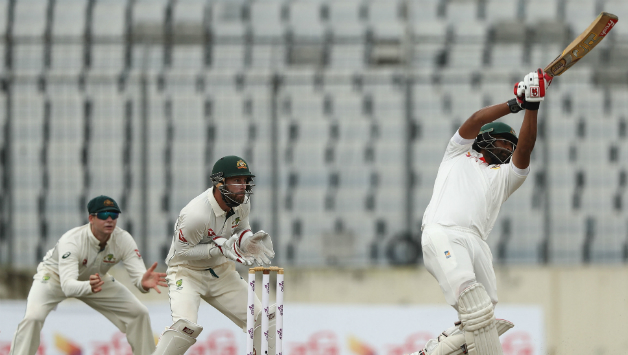 After the first half hour of play in the 1st Test in Mirpir, there was a feeling that Australia may be going to prove the pundit wrong after all, and run through the Bangladesh team in quick time and assert their authority over the less experienced opposition. And then a funny thing happened. Not only did Bangladesh fight back and get themselves to a position that looked very unlikely in that first session, but they then turned the screws in the final half hour, and brought this Test match back to level pegging, and anyone’s game by stumps on the first day.

No matter what the end result of this match, Bangladesh has already proven it will not roll over when the going gets tough. In the space of seven Pat Cummins deliveries, Bangladesh crashed from 0/10 to 3/10, a scenario that must have sent shudders through their dressing room. But three things happened that made this such a watchable day of Test cricket. Firstly, two Bangladesh’s ‘big three’, opener Tamim Iqbal and all-rounder Shakib Al Hasan, knuckled down and with a bit of good fortune put together a terrific partnership of 155 to rescue the innings. Following both of their dismissals Bangladesh hovered at 5/188, still shy of anything near what they required. But the second thing Bangladesh managed here was that the final five wickets eked out 72 valuable runs, which got their total up to 260, and still left them with a nasty period in which to attack the Australian batsmen. Had they fallen over for 200, the task ahead for Australia would have been less daunting. Thirdly, through sheer pressure to see out the day’s play, the Bangladesh bowlers managed to pry out both Warner and Lyon, while in the middle of this Khawaja surrendered himself to the most ludicrous display of running between the wickets that could possibly be imagined. Losing 3/5, Australia ended the day in relative calm through Renshaw and Smith, and at 3/18 it had been an enthralling first day’s play.

For Australia, their bowling was mostly good. Pat Cummins bowled with fire early on, and though he only finished with those three early wickets in his 3/63 he deserved more. Josh Hazlewood was incredibly unfortunate, catches falling just wide of fielders, balls bouncing over the stumps, inside edges saving LBW’s and also into pads instead of stumps. His 0/39 from 15 overs tells nothing of his effort. Nathan Lyon was a metronome for his 3/79 off 30 overs, but once again the feeling was that he was just bowling a bit too fast, averaging 91kph for the day. Perhaps it is the advice he has been given, but honestly with the bounce he gets, just slowing it down a little and getting more flight on the ball would surely be a benefit. He still bowled well today, as did his new partner Ashton Agar, back after four years. He beat both Rahim and Nasir to have them plumb LBW, and beat number eleven the way a spinner should, beat the slog in flight so that it went straight down deep mid-off’s throat. Perfect. His return of 3/46 off almost 13 overs was the best sidekick figures one could hope for in support of Lyon. He should also score more runs than Steve O’Keefe would, which may well come in very handy. Also one of the best parts of Australia’s day was Glenn Maxwell’s five overs, which produced 1/15 and the excellent wicket of Tamim. He bowled at a good off-spinners pace, swerved and spun the ball, and looked dangerous. As the latest in a long line of potential “great all-rounders”, he proved good with the ball. If he can score runs at number six (and by that he must surely average 40 to fulfil that role) and bowl half a dozen overs when needed to give the front line bowlers a break, then he has the chance to nail down his Test position for the foreseeable future. But it’s the runs that count.

Dave Warner again fell to indecisiveness at the crease. Having been triggered LBW he reviewed and was reprieved by DRS. The very next ball he was triggered again, and this time walked away, where DRS would have saved him. Again. As I’m sure I’ve mentioned before, he needs to find his mojo. In Sri Lanka he was overly aggressive, and fell too often having made a start in the 30’s and 40’s. In India he tried to reign that in, and was too often meekly beaten anchored to the crease. The answer is somewhere in the middle of those two tactics, being positive without being reckless. He needs to find that soon if Australia is to succeed in these conditions.
What the hell was Khawaja thinking with his run out? At least Renshaw had the wherewithal to refuse to respond to his suicide call. Uzzy is in a funk and is in the same boat as Warner when it comes to finding a way to score on these wickets against these bowlers. He too has some tough thinking to do, or else the selectors boom will be lowered once again.

Day Two should provide not only interesting cricket, but tell a lot about the two sides competing in this match. One is looking for redemption in Asia, the other is looking to prove they are no longer the meek on the lower rung. I for one can’t wait.
Posted by Bill Peters at 8:00 AM