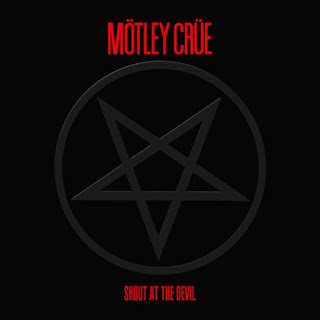 Back in my teenage years, in the middle of the Age of Discovery where new music and new bands were hopping out of the ground by the dozen, I gained my first exposure to the band . Initially it was through the video clip for the song “Looks That Kill” that had popped up on music video programs at specified times, and eventually a friend picked up the album Shout at the Devil and taped it for me. Thus began my love affair with this band in general, but on a wider scale the hair metal genre as a whole.

In the years since of course I have all of the Crüe’s albums which meant having also listened to their debut album, which preceded this. It had been a good album that showed promise, but not on a scale that this album produced. The jump in quality and energy between it and this is quite remarkable. Some fans disagree and think that this album waters down the punkish edge that the debut had and thus made it less alternative and more mainstream. I can see where that argument could be made, but the extra ‘polish’ that may appear to be here does actually help to tie in the whole album rather than expose any lesser tracks such as could be argued appear on Too Fast for Love. Here on Shout at the Devil there is a nice mixture of tempo on the songs without ever losing the energy and power of the album, and each member of the band can be thanked for that. Tommy Lee’s hard hitting drums are a constant metronome. He doesn’t always sound like he is doing anything special outside of a regular drum beat, until you realise that the nuances he uses are so much more than average, they are extraordinary. His drum sound on this album is perfect, it doesn’t take centre stage nor is it hidden in the background, it rides along with the other four in harmony. Nikki Sixx’s base lines rumble along in much the same way, not appearing to be out of the ordinary but in fact are driving the songs, supplying the energy in the tracks throughout. Mick Mars and his guitar shine along the way, not only matching the riff of his bass partner but making the perfect punctuations when his solo slot comes up in each song. Topping this off is the marvellous vocals from Vince Neil whose falsetto voice pierces through in places that are sometime unexpected, supported by the chanting back up voices of his three band mates to allow him to be the star out front.
As to the songs themselves, I love every one of them on this album. That could be put down to having had this album imprinted in my brain back in those early days rather than the songs being spectacularly good, but that is the advantage of listening to the album and not just having heard a couple of singles off the album. For instance, most people would know “Looks That Kill” as it is a well aired video and song, but how many of those people would know of songs such as “Bastard” and “Red Hot”, or the album closer “Danger”? A very low percentage I would suspect, and these songs to me are just as enjoyable and important as “Looks That Kill” is. “Bastard” and “Red Hot” are the two fastest tempo songs on the album, and help to raise the action and adrenaline of the song list. They’re not singles by a long shot, but they are terrific songs that make up the core of the album itself. “Knock ‘em Dead Kid” and “Ten Seconds to Love” settle in that same range that every great album needs, the songs that may not be the stars of the show, but are terrific supporting cast. Then you can add in the excellent cover of The Beatles’ “Helter Skelter”, which to me is the best version of this song, by any band. Again, the key word is ‘energy’ and this version has plenty of that in order to get the most out of it.
“Shout at the Devil” and “Too Young to Fall in Love” are the two real foot stompers on the album, based around the great Mick Mars riffs and leading drums from Tommy Lee. They both have that heavy mid-tempo riff with the drum pattern that encourages not only hard foot tapping in time but a solid head banging rhythm as well. And that is one of the key characteristics of this album. Perhaps the song structure isn’t complex or difficult, but it is enjoyable and entertaining, and that’s all you can ask of an album.

Plenty have suggested this is Mötley Crüe’s finest hour. There is enough evidence here to suggest that’s a fair comment. I believe they at least equalled this with Dr. Feelgood a few years down the track, but as much as I like their other surrounding albums I don’t think they get close to this one in terms of greatness. The formula comes up as a winner on this album, and when I put this on three days ago to listen to a couple of times while I reviewed it here, it has now been on constant playback for those entire three days, and there is every chance it will continue to stay on my playlist now for a while to come. Surely that alone is enough to indicate just how highly I rate it.