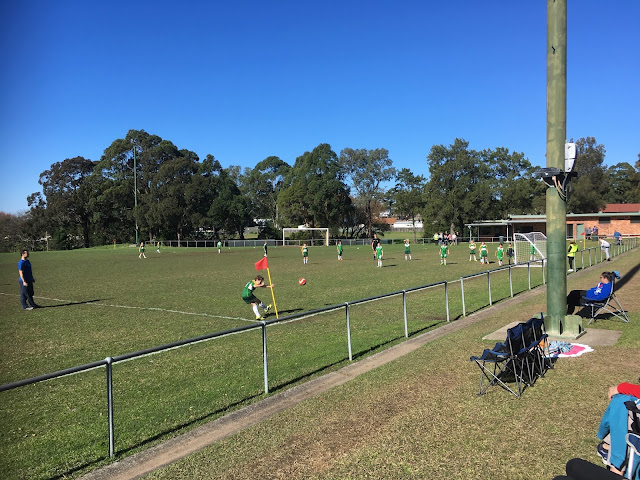 All those looking for today's match report from the Albion Park JSC Under 10 Whites clash against Russell Vale White... well, the short answer is... I'm sure all the kids had a good time.

Russell Vale looked the better side, and they played with more enthusiasm. The Albion Park team seemed half asleep, and didn't chase, tackle or run with any of the enthusiasm they have shown in recent weeks.
The score was 0-0 at half-time. In the second half a couple of good attacking opportunities went begging, an d a shot from Jack Tate just dribbled wide of the left post. In the best short period of the day for the park team, Belle Kadwell fought hard in the forward line to wrest the ball from her opponent, before making a great cross to the goal square where all three of Claire Kadwell, Zoe Middleton and Noah Black were free, with Noah eventually getting the goal to take the lead 1-0.
Unfortunately that really was the best of the play. There was not a lot of control with the ball, with too many big kicks attempted and miscued. The ball was also poorly cleared all match from the defensive quarter, and this led directly to two goals by Russell Vale when the ball was not cleared and then passed straight to the opposition who took their chance. Indy Middleton did make one terrific save from a strong strike that stopped the score blowing out further. At full time the score was Russell Vale 2, Albion Park 1.
Posted by Bill Peters at 4:05 PM