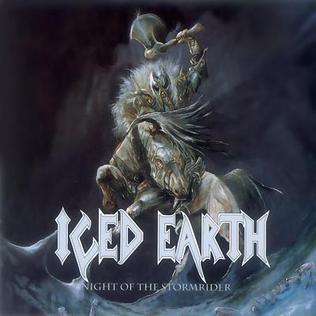 While Iced Earth’s debut album Iced Earth whetted the appetite without creating too many waves, there was great hopes that the follow up would be able to eradicate the lesser parts of that album and replace it with more of the good. In essence that meant replacing lead vocalist Gene Adam and bringing in John Greely in his stead, and more of that galloping guitar and drum beat flying through the songs to get it on the right track.

In short, in my opinion, it probably needed to be backed up with better vocals. I’m not exactly sure if vocalist John Greely based his vocal technique on any one singer, as he seems to jump around in style between King Diamond, Rob Halford and Cronos. The energy is there, but averages out all the good that comes from the music in the long run. I’m really couldn’t split Greely and original vocalist Gene Adam as to who annoys more as to downgrading awesome songs. And singling out the vocalist for being the difference is completely unfair I know, but whenever I listen to this album or its predecessor I can’t help but wonder how good it would sound with any of the future vocalists in charge. You only have to hear Matt Barlow’s live versions on Alive in Athens to know I’m right. And as it turned out, I gained a greater respect and understanding of this album from listening to Barlow singing these songs live on that album. Because they all sound better live, and the vocals have so much more power and tone there than they do here.
The opening three songs are great – “Angels’ Holocaust”, “Stormrider” and “The Path I Choose”. I don’t understand “Before the Vision” at all. Okay yes, I know it’s a part of the concept story but it doesn’t fit musically at all. Just another example of the sometimes muddled thinking about where to place songs on an Iced Earth album and how that may affect the run and mood of said album. “Mystical End” I think is only average, but this is followed by “Desert Rain” which lifts the bar again. “Pure Evil” is a song that changes inflection throughout, dependant on the style of guitar and vocals that come with it. I still think this is half genius and half ‘WTF?!’ But seriously, when the gallop comes in this song really goes hard. After more distraction from the acoustic bridge of “Reaching the End” we are treated to the excellent closing track “Travel in Stygian” which, despite its changes in tempo and mood throughout which does annoy me no end, finishes off the album in style.

While I may have overplayed the problems with the vocals that doesn’t eradicate any fault in the song writing. For me (and I may be on my lonesome here) I just don’t like the constant switching between moods in the same song. To me it halts the momentum of the song, and then the album. There is a lot to like here if you are a fan, and it does auger well for future releases, which of course is the good news that eventually came our way.

Rating:  "We paint the sky with blood tonight, setting free the damned to fight".  3/5
Posted by Bill Peters at 12:00 PM