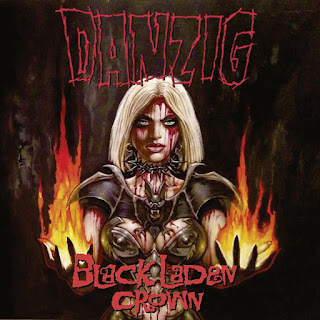 Is there any use trying to compare Danzig albums against each other? The man himself has been around now for decades, and he has been a torch bearer and an influential player as much as he has been a crazy loon and a faller upon bad times musically. The revolving door of members of the band has been used more often as the years go by such that the name Danzig now almost literally mean the one and only Glenn Danzig. Whether that has been a problem with the albums the band has released is an individual assessment, as will the enjoyment of the songs brought forth. Perhaps sadly, other factors must also be considered.

The title track “Black Laden Crown” opens up the album and is an enjoyable start. Following this I must ask a question. Don’t you just love the rhythm of “Eyes Ripping Fire”? I do. This is what brings out the best in Danzig’s music. You’re head bounces along with the drum beat and riff, Glenn’s vocals do their best work in this environment, and you also get to insert a guitar solo to impress the mob as well. This is the format of song that I think brings out the best in the band’s work. “Devil on Hwy 9” goes in the same direction with the same qualities. “Last Ride” infuses the much slower maudlin pace that Danzig often sit on, but because of the energy of Glenn’s vocals it makes it a classic Danzig tune rather than a dull and bonded track that would be the case if anyone else attempted it. The problem with latter tracks such as “The Witching Hour” and so forth is that there isn’t that same energy in the vocal track, and this the songs begin to fall flat because of it. “But a Nightmare” seems to have guitar level problems but more importantly a guitar and drums riff that doesn’t change for the whole second half of the song makes it feel as though it drags on forever. “Skulls & Daisies” could have been improved greatly with the same enthusiasm in Glenn’s vocals as he gave in “Last Ride”. “Blackness Falls” sounds like the same song, with the same lack of drive. And “Pull the Sun” has that reasonable Danzig croon within but it somehow feels a bit like too little too late.
So now we can address some simple issues. Why spend three years over recording nine songs, with five different drummers? And the production is a mess, if not non-existent. You can hear the difference between tracks, where some come across as a normal sounding environment, and others sound like they are demos being recorded on an old four track in the lounge room or garage. Is this a thing? A rebellion against the fact everyone can sound like a pro now with a laptop and a microphone, so we must make this sound like it’s B grade as a two fingered salute to the amateurs of the world? I don’t know, but there’s a difference between ‘stripped back’ and ‘poor production’. This is generally the latter, and it doesn’t improve the album as a result. It also suffers from not having a band as such together to record the album. Along with the five drummers, of which Glenn himself was one, the rest of the guitars are recorded by Glenn along with Tommy Victor. As such, there’s not a lot of individuality there to help influence the tracks in a positive way. It cried out for players of the stature of former band members Johnny Christ and Eerie Von to make their instrumental pieces their own and add their own flavour to the tracks. Because this is basically the same two musicians on all the instruments, that flavour doesn’t tend to seep through.

I started off by asking should we compare Danzig albums from different eras. Mainly I guess that this questions comes across because the early music this band released was and is so impressively awesome that it becomes a difficult thing to equal. While I don’t think this is a bad album, I think the arguments as set out above do not allow it to break free and be as enjoyable as I feel it could be given the basics of the music. While not wanting to hark back on the band’s past, I think a dose of the inspiration of those albums would have spruced this up nicely.