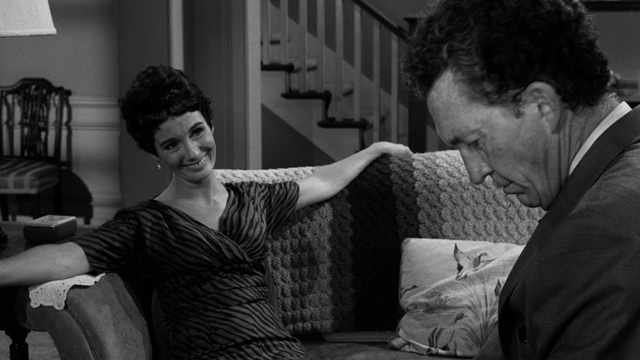 Once again, the basis of the best Twilight Zone episodes comes not only from the slow and intriguing build up throughout the episode, but also for the conclusion to not only have that twist that you weren’t expecting, it also must be ‘believable’ in a twilight Zone kind of way.

This episode has most of the tools that make a top-flight episode. The Movie star that has never forgotten her home town, who all helped to get her where she is today and is still her best fan club. When they send her a ring as a present and she begins to see family and friends from her home town, imploring her to do things, she drops what she is doing (a new film in Rome) and heads home. While she is there, she sees several people floating into vision, and each time she is compelled to see them, and each time another piece of the puzzle falls into place as to why she is there. None of this is revealed to the viewer, and when she decides to hold an event in direct competition to one that is already scheduled in her town, her friends seem upset. It isn’t until the final reveal – when we see that she is actually on a plane that crashes in a nearby field where the other event was being held, and that her event has drawn away all of the people who would have been killed by being there – that we are dealt the final answer.

So yes, this once again utilises the Twilight Zone as an entity perfectly, and the constant reveal through the episode makes it even more satisfying when the final conclusion comes. Very entertaining.