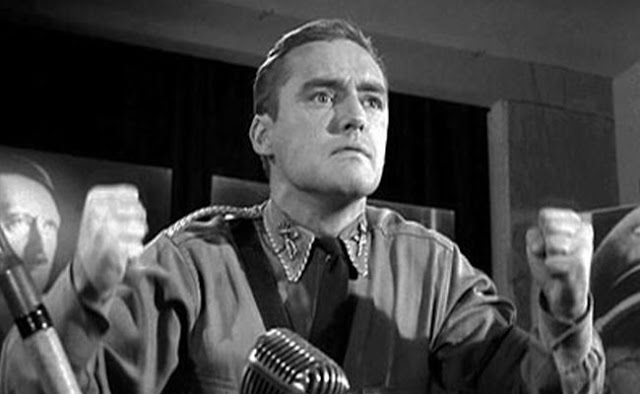 
What better way to highlight the state of the world in regards to fascism and other such activities than to utilise the Twilight Zone, to portray evil in this way as the face of the man who oversaw the death of millions? What I like most about this episode is that Adolf Hitler was brought right out into the light (literally) as the face of evil in this tale. There is no mucking around, here he is in the flesh. But is it really the man in the flesh? Is it truly Hitler himself? Or is it just the manifestation of the evil in the heart and mind of Peter Vollmer that is Hitler, and that he is merely imagining his presence? That is how well the episode is written and produced, that this question isn’t given a definitive answer, to left open to interpretation.

Dennis Hopper – a very young Dennis Hopper – is brilliant in the lead role in this episode. He moves wonderfully well between the angry ‘dictator’ to the scared, frightened small man that lives inside that cover. He made the whole episode believable because of his efforts. Ludwig Donath as Ernst Ganz was also terrific, especially his speech within the hall while Vollmer was engrossing the masses. I also found amusement in Howard Caine’s role as one of the ‘nazi’ henchmen, given his role later on as Major Hochstetter in Hogan’s Heroes.

This is yet another of Serling’s statements on the state of the world, and the evil amongst it. Once again he nails it perfectly.