Relay For Life and Other Matters

Can I just write something here to express my pride, admiration and love for my family after a long and successful weekend at the Shellharbour Relay For Life.

Eldest daughter Jessica was a beacon, not only participating in the stalls at our team table and walking her laps, she performed with her school vocal group on Saturday afternoon who were all wonderful as always. She was supportive and helpful and showed the true spirit of what the event is for. I was extremely proud of her.
Middle daughter Madeleine was as enthusiastic as she always is. She wants to be 25 years old now, and carries herself like it. She promoted and sold our stuff, she walked around the track selling Zooper Doopers, and she was bubbly and excited to be involved. She also helped do someone's makeup for the late show Saturday night, which i think she was most excited about. She is a whirlwind, something she gets from her mother.
Youngest child and son Josh had a ball. He had been built up by his father during cricket in the morning, suggesting if he made runs and a couple of others made runs they could get the 110 they needed to knock off the leaders. The resulting golden duck, from the ball of the day mind you, led him to tears - not for himself, but for thinking he'd let his team down. He pulled himself together not long after, but again I was left thinking how lucky I am with my kids. He mightn't have done many laps at Relay, but he played cricket, Aussie rules, soccer and every other sport he could be involved in.

Finally there is Helen Peters who for the last few months has been a superstar in organising her 'team' for Relay For Life. 48 members in all, she has been the centre of the cyclone, directing the troops, finding donations from local businesses for the team raffle prizes, putting together what people had to bring on the day, who would be there and when, and then on the day always supervising the whole shebang to ensure everything ran smoothly. She wasn't always able to do what SHE wanted, but she sacrificed that to make sure everything ran right on her ship. Along with this she has juggled three kids and their activities and a husband who at times is less supportive than she deserves. I can assure you I would have dressed up on Saturday night for no other person. She thought it would be fun, and the idea gave her pleasure, so it really was the least I could do to help HER Relay experience. Though I sometimes see it as an inconvenience, you cannot help but admire her drive and energy. Along with all of the others who worked so hard on Saturday and Sunday, raising over $2,700 so far from the Walker & Talkers team is a triumph and a credit to Helen.

Today is also our 24th wedding anniversary. While no ship sails on a calm ocean at all times, I guess it is how you survive the storms that dictates how your boat sails on afterwards. This weekend is a timely reminder of the remarkable woman I share my life with and continue to love despite the hiccups that come along. Love enough, in fact, to dress up in drag in a raging storm just because it amuses her. 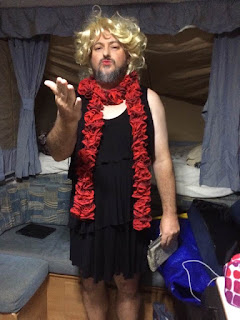 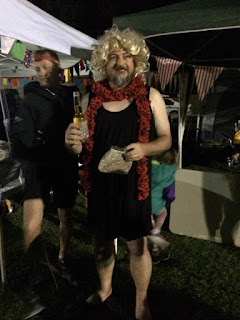