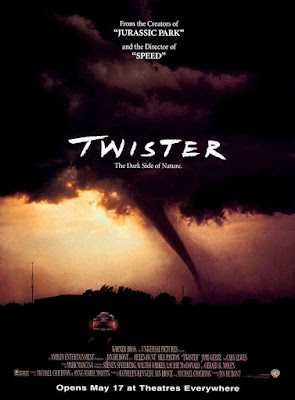 With the wind blowing all around us, tonight it was time to go back to one of the favourites. I first saw Twister on our Queensland holiday back in 1996. Since then it has rarely failed to entertain. The fact that the special effects still hold up so well 20 years later is a testament to the techniques used at the time.


As action movies go it still works well. The humour laced in throughout helps to carry the plot line through the continued series of storms that the two groups are chasing over the long long day that eventuates. It helps if you don't try and break down the plot too much however. If you do, you will have a difficult time believing how quickly everything breaks down, and then reintegrated itself again.
For me, it is the support cast that wins the day. The stars have their moments, but all of them are so annoying that if the support cast wasn't there, this film would have been a lot less enjoyable than it turned out to be.

Best Moment: anytime is on the screen. Long before his Academy Award winnings roles, he is the light in this film. "The Extreme! It's the Extreme!" "Losers! Move on!" "There's some positives in this. At least she we know she can fly".
Not the Best Moment: Bill Paxton. Helen Hunt. Jamie Gertz. They are good in places - Paxton certainly when he was called upon to show how much his character actually knew about storms and twisters - but when the story fell into the relationship triangle, it felt like the movie stalled, again and again.
Times Watched: somewhere between 15 and 20.
Rating:  The action and support cast help to keep this always watchable.  4/5
Posted by Bill Peters at 11:00 PM