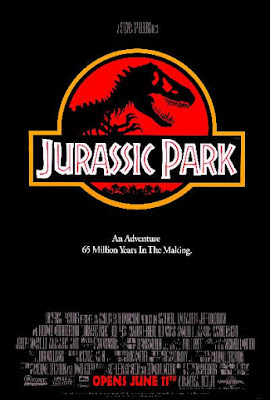 Josh has been asking to watch this again for weeks, so given the rain that has flooded the Illawarra this weekend, and the fact everyone else was still asleep, we watched it again this morning. And once again it proved its durability in both special effects and storyline, as well as the performances form the principle actors. The plot is outlandish of course, and the fact that everything went wrong that could go wrong is the perfect disaster film plotline. But you so easily get swept up in the action that it of course all becomes so plausible. The creating of dinosaurs from fossilised mosquito blood is at once impossible and intriguing. The possibility of the carnivores attacking all and sundry exciting. The special effects and animatronics make it all appear so real and believable.

The actors and brilliant. Sam Neill and Laura Dern are great in their roles, heartwarming and believable. Sir Richard Attenborough is fantastic as the wealthy dreamer whose drive makes it all happen - "spared no expense". The kids play their roles perfectly, while Wayne Knight and Samuel L. Jackson both make their small parts worth watching. the star however is Jeff Goldblum, who again steals the show and the limelight whenever he is on screen.

Best Moment:  The scene when the cars stop at the Tyrannosaurus section. It is still one of the best 5-10 minute scenes in all film history. The water shaking, the T-Rex escaping and creating carnage, the car being pushed into the tree over the concrete barrier. It is all superb and edge of your seat stuff, even when you have seen it a dozen times.
Not the Best Moment:  There must be some part somewhere, but I honestly can't think of anything.
Times Watched:  More than 30 times now, and it never gets boring.
Rating:  Great story, terrific acting, wonderful special effects. It's a winner. 5/5
Posted by Bill Peters at 12:16 PM