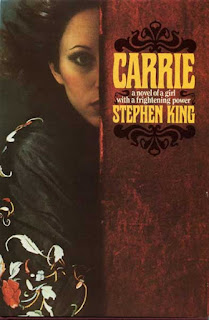 I guess one of the things I have had some problems with in regards to Stephen King novels is the endings. Not all of them, mind you, and probably not even half of them, but on occasions it just feels as though the whole story runs out of steam, and the ending feels either rushed or just not in the direction the story was going. While that isn’t the case in Carrie, it does feel like it maybe comes to an abrupt end rather than a fashioned one. And, I guess, given that Carrie’s demise does come quickly once she has disposed of her mother, then perhaps that is appropriate.

This being his first published novel, it is a shorter story in all, and if this was handled later on, I suspect the destruction and morbid slaying of the students at the prom would have been given a bigger expansion. Also the disdain of knocking off Chris and Billy would surely have been brutally and perversely explained in greater detail if this book had been written at a later date, with more confidence in his publish-ability behind him. Even the confrontation between Carrie and her mother just feels as though it lacks something, though I have no doubt that at the time it was published it would have been adequate. Given what he has written since and the vision available to Stephen King as a result, the final battle feels a tad tame in comparison. Of course when this was published there was nothing to compare it to.
Posted by Bill Peters at 3:14 PM