When Docile Wickets and Panicked Batting Can Still Produce an Upset 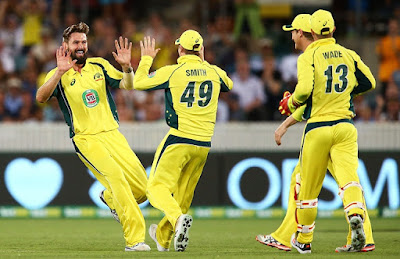 Australia's groundsmens' summer of flat, lifeless wickets continued at Manuka Oval in today's match, and despite the (rather unexpected) climax to the match, it again highlights a problem that either Cricket Australia is the mastermind of, or that Cricket Australia must solve before next summer comes around.

For 87 overs of this match the batsmen dominated more than batsmen should ever be able to dominate. Australia did almost as they pleased during their innings of 8/348, only losing wickets at the end in the quest for more runs. Warner returned to belt 93 before throwing his wicket away. You know the pitch must be flats and unresponsive if Aaron Finch makes a century, because all he does is hit through the line. Mitch marsh showed that even out-of-form all rounders can manage to make a few, while both Steve Smith and Glenn Maxwell played a variety of shots that you can only get away with if you are super confident of what the ball is going to do off the pitch. Then, just to prove the point, Rohit Sharma, Shikar Dhawan and Virat Kohli just smashed the bowling, going at 8 runs an over from the outset and never appearing in any trouble at all. Sharma gifted his wicket away strangled down the leg side, and his frustration was obvious. Australia's bowlers had no answer to the onslaught, and at 1/277 off 37 overs the game was over.

When did it become good cricket when there is no contest between bat and ball? For the most part this is what we have seen all season in international cricket. The only time the ball seems to have had a half decent chance was on the green-topped pink-balled Adelaide Oval Test, and whenever the West Indies batted in their three-Test series. These one dayers have seen all eight innings produce totals in excess of 290 runs, a first in international cricket. Even the use of two white balls has not stopped the batting carnage. Now while this is good to see on occasions, because everyone likes to see good innings, it just becomes ludicrous if every match is dominated by the batsmen, who have nothing to fear from a pitch that provides perfect bounce and speed and a ball that doesn't move in the air or off the seam. Quite honestly, much of those first 87 overs of this match became boring, because there was no challenge.

So what happened in those final 13 overs, when the India freight train suddenly careered off the rails at a frightening speed and disintegrated? OK, so Shikar finally falls. That's understandable. Then Dhoni comes in and finds a way to get out third ball. OK, such is cricket. However, when Kohli meekly surrendered to mid-off, it was total chaos. Steve Smith turned the screws, brought in his field, put in a slip, and was immediately rewarded for his tactics. Despite the fumbling gloves of Matthew Wade again returning to centre stage, it was a collapse worthy of the term "Kiama Kollapse", leaving Australia not only victors, but victors by an amazing margin of 25 runs, when India had needed 72 runs from 78 deliveries with 9 wickets in hand. The unloseable match.
If it had been Pakistan, there would have been immediate rumblings of match fixing. Australia weren't suddenly that good. India just crumbled under pressure.

More than anything else with this match, it must not take away the focus of the real problem here. India's inability to win this match should not dim the fact that Australia's pitches are far too docile in this modern age, and that unless this is arrested and the bowlers are given some assistance from the country's pitch curators in the near future, the standard of cricket that is bringing the fans to the game will deteriorate, to the detriment of the game in our country.
Posted by Bill Peters at 11:00 PM

Email ThisBlogThis!Share to TwitterShare to FacebookShare to Pinterest
Labels: 2016 India in Australia