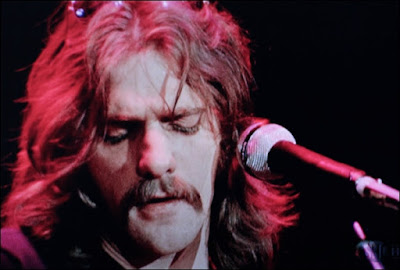 I grew up listening to the Eagles in my house. Not only were their hits of the 1970's plastered all over the radio at that time, but both Mum and Dad were fans, and so they were one of those bands that became ingrained in my psyche as I grew up.
As I got older and began to appreciate such things as harmonies and guitar riffs and song lyrics and the like, I began to enjoy the band and their music for more than just a nod to my childhood. I appreciated everything that went into each song, could hear each members harmony or lick in each song.

In accordance with the recent deaths of famous musicians populating the news feeds, the news of Glenn Frey's death at the relatively young age of 67 was as sad and unexpected as most of those others in recent weeks. The Eagles had only finished their world tour entitled "The History of the Eagles" in the middle of 2015, and now some six months later Glenn had succumbed, apparently to a combination of surgery for an abdominal problem and the onset of pneumonia.
Glenn was one of the founders of the band, and not only wrote or co-wrote a lot of the material he also sang lead vocals on many of their greatest hits, and certainly some of my favourites. Songs such as "Take it Easy", "New Kid in Town" and "Lyin' Eyes" are some of my favourite Eagles songs (with "Take it Easy" being on my karaoke roster on the few occasions I deem it necessary to partake in such activities), while he also sang on other great tracks "Peaceful Easy Feeling", "Already Gone", "Tequilia Sunrise", "How Long" and "Heartache Tonight".

His solo career, for me, was less enthralling, but his hit "The Heat is On" from Beverly Hills Cop and "You Belong to the City" from Miami Vice were tracks that stuck in your head during the 1980's.

While his best material came years ago, it is a loss to see Glenn Frey move on. As he sang so well, "They will never forget you till somebody new comes along..."
Posted by Bill Peters at 1:54 PM