One Day Demolition, and Tests for All. 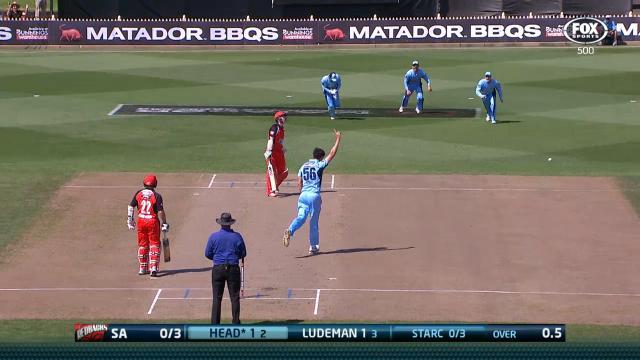 I was at North Sydney Oval on Sunday, when New South Wales somewhat predictably demolished South Australia to win the Matador BBQ's Cup for the domestic one day trophy winners. It appeared as though it was going to be an early day when Travis Head and Tim Ludeman went early, but a fighting and serene partnership from Callum Ferguson and Tom Cooper brought the Redbacks back into the match. Their 152 run stand ended with Ferguson dismissed for 61, while Cooper's century off 119 deliveries was almost faultless. It will be interesting to follow both batsmen's fortunes this summer, as they should still have plenty to offer the national team if they can string some scores together. Unfortunately for South Australia, when Ferguson fell at 3/166 the innings fell over, and the total of 221 never looked enough. Nic Maddinson played a fairly typical innings for himself, breezy, some lusty blows and then throwing his wicket away when seemingly in charge. Ed Cowan and Steve Smith played calmly and without too much risk. Cowan again made a significant score, 88 not out off 78 balls, enough to again show he is perhaps batting better now that he did when in the Test team for two years. Sadly, despite his efforts, it would appear unlikely that he is going to receive a recall anytime soon. Smith again took his time at the start of the innings, being only 7 off his first 26 deliveries, before pulling the trigger and taking the game apart, finishing on 84 not out off 72 deliveries, and the game was won with 20 overs to spare.

On a side note, Josh was asked to go out for the national anthem with the players before the start of play. He received a token medal from Tim Ludeman and go tot shake his hand, all on national television. He had a great day seeing all of these quality players up close.


What is to be made of the West Indies, in particular their batting. Having been easily disposed of by an innings in their 1st Test in Sri Lanka last week, this week their bowlers stood up and pulled them back into contention. They bowled Sri Lanka out twice, for 200 and 206, with all of the bowlers doing a fine job. Yet despite this, they could manage only 163 in their first innings. There were better signs in the second dig. Despite losing the entire fourth day to rain, the Windies had reached 1/80 when they were chasing 244 for victory on the final day. Just when the hopes must have been rising, they lost 8/58. The final losing margin of 72 runs belies the effort of the bowlers to drag their team into the match.
Where to now for this maligned team? They lost both Tests to Australia in the Caribbean, and they have lost both Tests in Sri Lanka. In Australia at Christmas, a bowling attack of Taylor, Roach, Holder and Bishoo or Warrican should be able to do a reasonable job in the conditions. But what of the batsmen? How will they cope with Johnson, Starc, Hazelwood, Siddle and Lyon? On current form it looks like a massacre, and days of lost cricket from Tests finishing early.

Pakistan and England are in the middle of a very competitive series, one in which a 1-1 score line after two Tests would probably be a fair result. England ran out of time to finish off Pakistan in the 1st Test due to fading light. In the 2nd Test, they fought bravely in an effort to bat out the final day, only to fall six overs short of doing so.
No, I do not feel any sympathy for England.
What does this leave in store for the final Test? Moeen Ali is not working as either an opening batsman or a spin bowler. Jos Buttler is struggling with bat and gloves. And Cook's captaincy does appear... bizarre. the only time England have looked like getting wickets is with their seam attack. And yet it is the spinners who are still bowling the majority of the overs between them. I know it is hot, but you need to get wickets to win matches. This means Anderson, Broad, Wood and Stokes must bowl more overs consistently.
Solution? Here you go. Alex Hales comes in as opener for Moeen, and Sambit Bal comes in for Buttler, with Bairstow taking the gloves. Each session is 30 overs, so from one end you bowl Anderson, Broad and Wood for five overs each, at the other you bowl Stokes, Rashid and Sambit for five overs each. And repeat. Simple? Yes. It certainly is from here.
Posted by Bill Peters at 7:51 AM

Email ThisBlogThis!Share to TwitterShare to FacebookShare to Pinterest
Labels: 2015 Assorted