Since this was first brought up - and then booked - back in August, this has been a day I had been looking forward to. It was a bucket list moment, something I had wanted to do for as long as I can remember - attend a Boxing Day Test at Melbourne against England. Having been conceived by Sam Wolf and Daniel Reilly, and then orchestrated by Jason Wills, Helen had convinced me that I should go, and the day had arrived. Also coming along was Ross Wolf, for the first day's cricket, before leaving The Wolfpack to fend for themselves.

Jason's bus picked me up from my front door, courtesy of Geoff Wills, whose displeasure at not coming on the trip itself was plainly evident. Love it Geoff, maybe next time your son will think of you! Jason had provided beers for the trip up, which felt like a perfectly normal thing to do at 7.00am. Unusually there was no great scramble to get off at Engadine Pub for a pit stop. Probably a good thing given that it was too early for opening.

Having checked in at Sydney airport we had another couple of beers while watching the preamble to the Test on TV before boarding the plane for Melbourne at 10.30am, just as the first ball was sent down at Melbourne. Clarkey winning the toss and sending England in?! Amazing.
We arrived safely at Tullamarine (with our Facebook followers having had an hour's peace while our phone's were turned off in-flight), and caught the Skybus into the centre of Melbourne.
One of the quirks of our accommodation, at Plum Apartments in Collins Street, was that their admin centre was a couple of kilometres away from the actual place we stayed at. By unanimous vote (yep, even he agreed to it) Jason was carried on to the admin centre by our mini-bus transfer, while we sat inside the lobby waiting for the keys to arrive.

After about an hour of waiting the room was made available to us. Big enough for all of us, and centrally located, Jason was to be commended for his efforts.

We spent the second session of the cricket watching in our room, having some lunch and a few room-christening beers. Then it was time to put on the togs, and we headed down to the Transport Bar on the banks of the Yarra for more beer and watching of the cricket.

It was a warm day, and the cricket had been somewhat slow by the English, and for the couple of hours we were on premises, there was a steady stream of spectators that had been at the M.C.G but had left early, citing the slow play and the huge queues as their reasoning. Fair enough, as the crowd eventually broke the record for the biggest one day crowd to attend a Test match. The last session seemed more exciting, as Australia snared late wickets, although the steady influx of alcohol and the sighting of rugby league pin-up boy Brad Fittler probably helped.

Once play had concluded at 6.00pm, we walked down to Crown casino, where Jason insisted there was an Italian place to die for to eat at. The fact that it took an hour to find our way through the crowds and Jason's direction to make this place should surely be left aside at this point.

To Jason's credit, the food was great. The black angus rump I had that was one of the specials of the day was great, apart from the lack of sides. Still, I rarely complain too loudly about things like that. 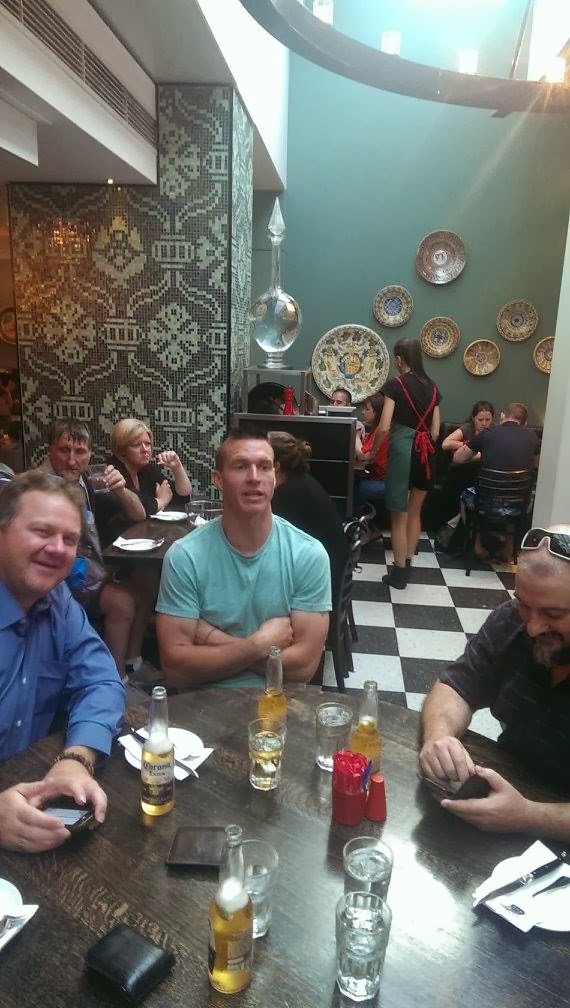 From here it was into the gambling areas themselves, and there was a parting of the ways from this point. Sam and Jason were quickly taken in by the high card table. What a fantastic way to lose a lot of money very quickly. Such simple rules. You get a card, the dealer gets a card. Highest card wins. Table minimum bet $15. Just terrific. I thought two-up was the easiest way to lose money, but I have been proven wrong. Jason soon disappeared, and while Ross stayed with Sam, Rocket and I headed for the Sports Bar, not only for another drink, but to check out how Will Sheridan was faring in the Renegades BBL clash with the Scorchers. Answer - he did OK, Renegades got done.

Tables were at a premium, but we eventually waited long enough to get one. Sam and Ross returned, with Sam having made a windfall and started buying drinks. Then Jason returned, having found the Caribbean Stud table and also won a sizable portion of the stakes, and began buying more drinks. Yes, more than any of us needed. 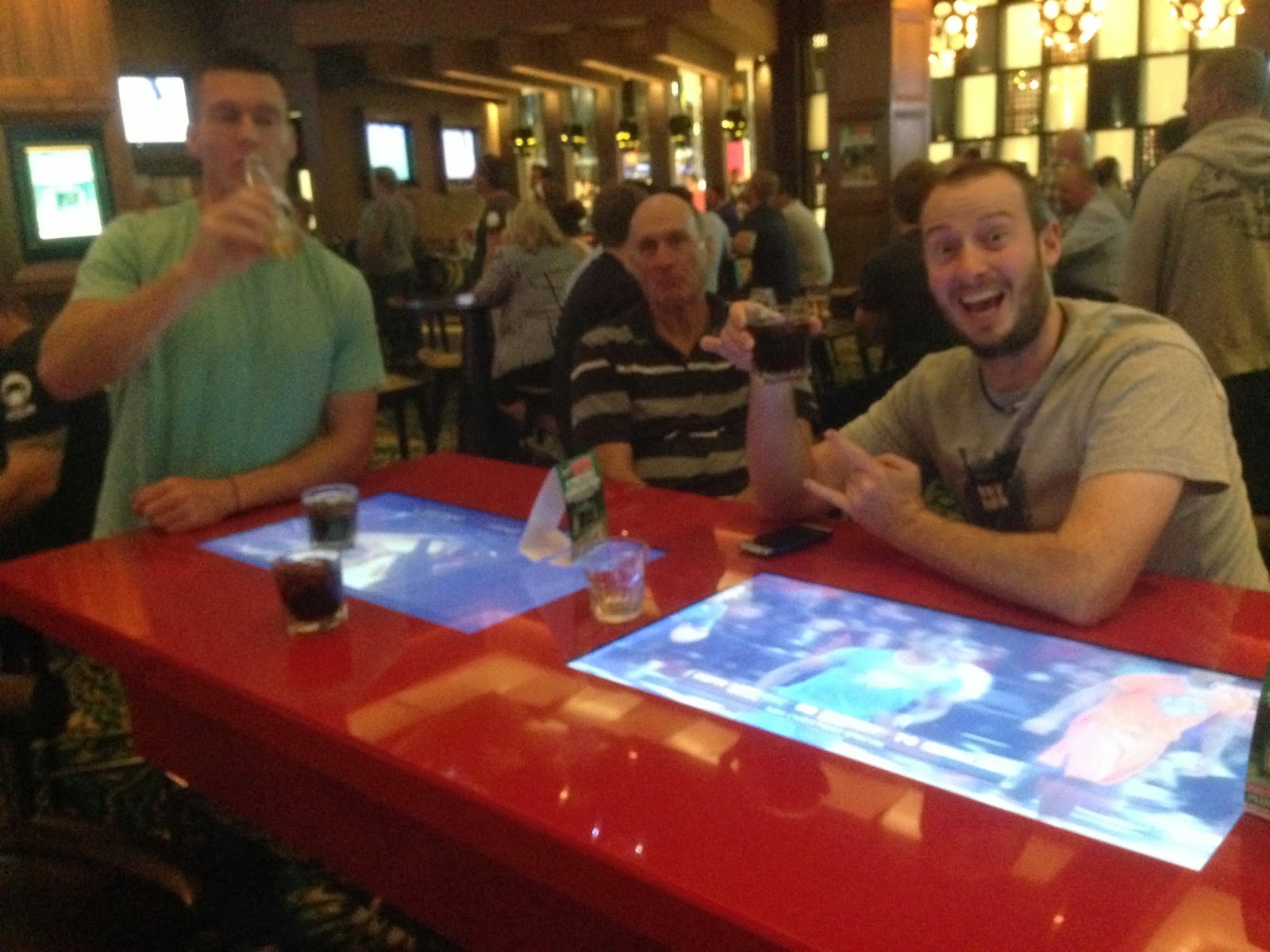 We walked back to our room, though it did appear that we got hopelessly lost along the way - although that could perhaps just have been the alcohol confusing me about that. It did seem that the walk back was a lot longer that the walk there, and it had been a long walk. Two of our party thought it was a little bit early to call an end to the night, and they broke away within sight of Collins Street. Those of us not so inclined headed in, and by 1.30am I was discovering how comfortable my bed was. 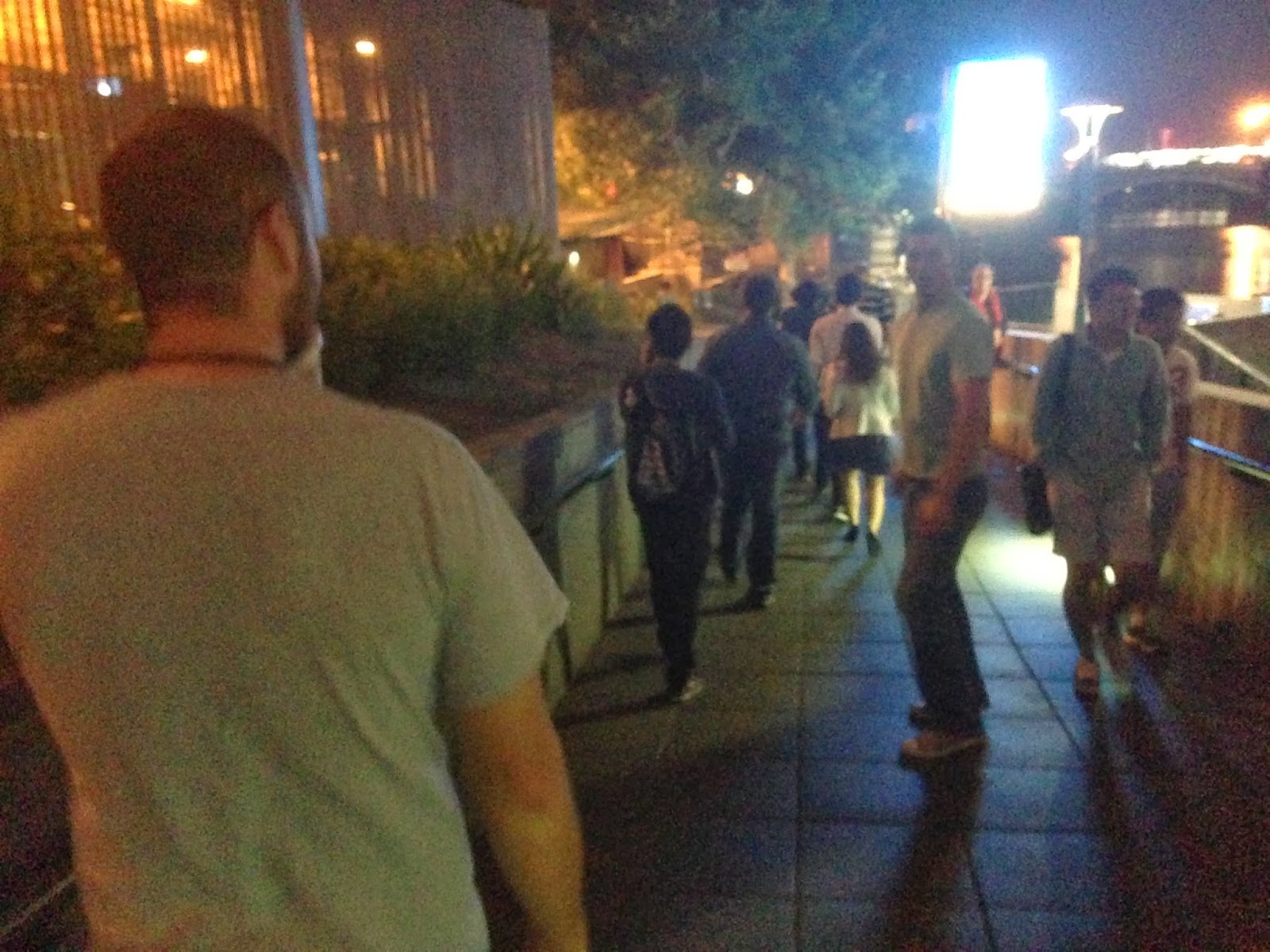 Email ThisBlogThis!Share to TwitterShare to FacebookShare to Pinterest
Labels: 2013/14 England in Australia, Two Men on a Cricket Tour