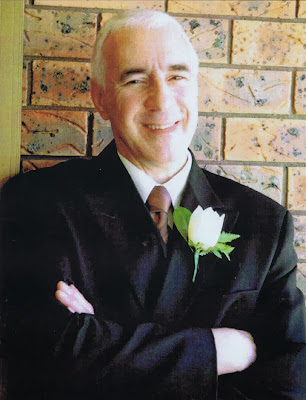 Helen and I today attended the funeral of Tom Cincotta, the father of my one of my few close friends, John.

Funerals are a natural course of everyone's lives, and attending them is never a joyous occasion. What perhaps made this one more significant to me was that, from my circle of friends that I have grown up with through school and into the present, Tom was the first of any of our parents to pass on. Though 67 is not an old age in these days, it brought home to us more heavily a taste of our own mortality, and also that our parents are no spring chickens either, and that it could have been any of them that had gone first, or indeed, would be the second to go. I'm not trying to be morbid or to provoke dark thoughts, rather just explain the feeling that came over me when Bono first broke the news to me.

Tom's family did him proud on the day. His kids, and his grandkids, all did the things they had to do well. Bono gave an excellent eulogy, not over the top, but giving a wonderful appraisal of Tom's life. A man who had been in the seminary, who had left and fallen in love, married and had children. Who started with a milkrun, and then bought into more milkruns. Who had then gotten into franchises, opening Big Rooster stores all down the south coast of NSW. Who had sold out to Red Rooster at the right time, and then lost almost everything when his next venture Antoms was unfortunately beset by financial problems. Then starting from scratch he was involved in the florist his children moved into in Parramatta, before then settling into Sit n' Chats Cafe at Westmead, where he was working until recent weeks.

A couple of our own stories highlight for me who Tom was. Kearo's favourite story was always when he went over to see if Bono was home one day. Tom met him and asked him "Do you know how to push a lawnmower?". When the reply came in the affirmative, Tom said, "Great, well here you go!", and Kearo got to mow the Cincotta's lawn. Great stuff. For me, there was always the threat of having to pick fireweed at the Curramore residence they bought. Any question as to whether or not I was busy on any weekend was always met with a response of either cricket or golf commitments, in order to avoid having to join the family outing of hand-clearing the property of the pain in the arse weed. Many times this was an honest response, but there were certainly occasions when the truth was stretched to the very limit.
I generally found Tom easy to talk to, though as I was usually with Joel when we saw him the conversation would usually move to the two of them after a short while, as they often had more in common to talk about. Tom was always interested in the work I was involved in, and the ins and outs of any industry I was working in.

So. Vale Tom Cincotta. He was one of the hardest working men I have known, and whose working philosophies and ethics have been instilled in his eldest son. I only hope that his eldest son will learn one lesson, and know when it is time to stop working and enjoy his own family and the rest of his life before anything untoward happens to him.
Posted by Bill Peters at 6:12 PM