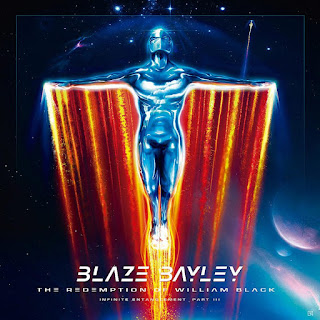 This is the second ‘trilogy’ of albums I have finished listening to over the past two weeks. The first was Geoff Tate’s Operation: Mindcrime trilogy story, which for me ended much the way it had started. When it comes to Blaze Bayley’s concluding chapter in his Infinite Entanglement trilogy, entitled The Redemption of William Black: Infinite Entanglement Part III, I have a similar feeling, in that I don’t think any part of the three albums has changed my mind over the whole concept of the story and the albums it entails. Indeed for some time I was concerned that it had in fact fallen backwards.

At my advancing age in listening to music in general and to heavy metal at the forefront of that, I have become less frantic in trying to devour every aspect of an album. In my youthful days in the 1980’s I spent hours poring over record covers and devouring lyrics to ensure I knew every single aspect of a song or an album, and was able to decipher this for anyone that would listen to me. The occasional concept albums that came my way found me even more diligent in this aspect. But old age has found I don’t have the time or devotion to go down that path anymore, and as my collections have moved from vinyl to disc to digital I don’t even have to know what the cover artwork is anymore. This becomes even truer as to the nature of the storyline that Blaze has set out over these three albums. I honestly haven’t taking in the lyrics enough to actually be able to work out what the story is he is telling. All I’m listening to are the songs, and picking up snatches of what is being said, and just wondering if I like it or not. My Past Self would be quite annoyed with my Present Self in this regard, suggesting I needed to take more time to envelope in the story. Past Self had much more time available to him to do such things that Present Self currently doesn’t have. One day I do intend to sit down and discover this storyline, but as yet I have not.

As to the songs themselves, I admit that after the first half a dozen listens to The Redemption of William Black: Infinite Entanglement Part III I felt disappointed. I couldn’t find much here that I truly enjoyed, that was jumping out at me and grabbing me, and at that time I felt this had some major flaws. Just allowing it to play through in the background while I did other stuff it felt like every song was the same, and that there was little to define these songs or this album from a lot of Blaze’s recent stuff. To be honest I was ready to cast it aside, and perhaps come back to it at a later time. Over the next half a dozen listens though I began to find my way into the narrative as such, and found the rhythm of the album, and then it became less of a chore and more of a pleasure to listen to. In the long run, I had to find the Blaze Bayley definition again. He has his own style that has been developed over recent albums where he now has no Blaze Bayley band to collaborate with, and instead he writes through his own thoughts while bouncing them off others he is close to at the time. In many ways it has brought a similarity to his music which can be off putting, especially for those that don’t enjoy his style. And that is the crux of this album. If you like Blaze’s style and substance, you will enjoy this album. If you do not then you won’t find anything here to win you over.

I’m glad that I stuck with this, and gave it time to win me over. It is not his best work, and there are few songs here I would consider putting on a greatest hits playlist of his work. That can be the problem with concept albums, the songs have to fit the story, not just win you over as songs themselves. Compared to other albums I have had on rotation over the past couple of weeks, this sits somewhere in the middle.