APJSC Under 11 Reds: Round 1 vs Albion Park Yellow 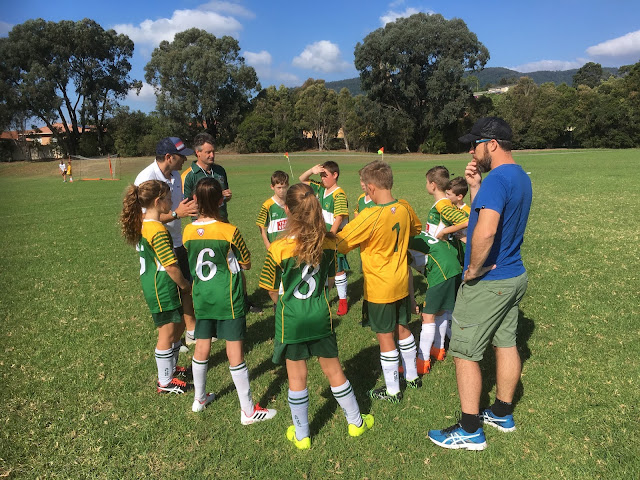 The brand-new season for the Albion Park Junior Soccer Club began today, with the Under 11 Red team looking forward to a successful season. In retaining all ten players from last season, the kids and their parents all converged on Terry Reserve for their opening match against the Albion Park Yellow team. 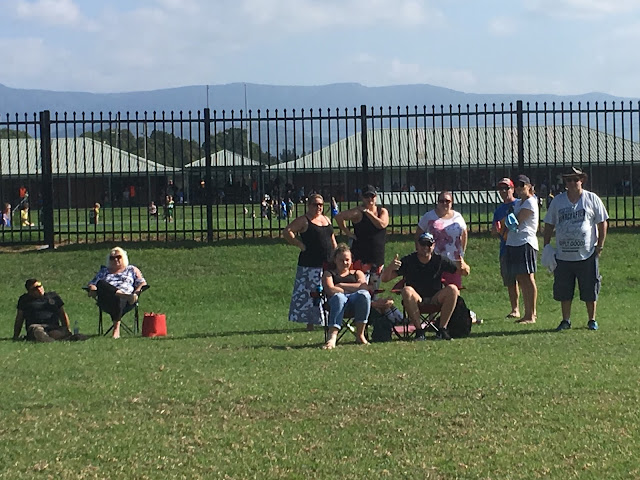 It was a fast start from the Reds, with Kyan Van Helden jumping out of the blocks and putting the ball in the back of the net in just the second minute of play. Another volley two minutes later went just wide of the post, but his third strike of the morning brought his second goal in just five minutes, and the Reds led 2-0. A great incisive run down the left by Indy Middleton kept the pressure on their opponents, and not long after there was a great coast-to-coast play, as Brock Young tackled and stripped the ball, passing it to Josh Peters who manoeuvred the ball to Jack Tate and then on to Claire Kadwell who pushed the ball past the keeper, and made it a 3-0 lead.

At this point their Yellow opponents decided that they needed to attack via the long ball to get through the Red line, and they made a couple of good attacking raids. Josh was moved from back to midfield and made his presence felt immediately. He put through a great ball to Jack-Ryan Eberwein who just missed with his shot. Josh then moved past two players and took his shot only to have it well saved, and a minute later he got another shot in traffic, but this time hit the post. His next chance came from a long way out, and his great shot was saved by the keeper at a long stretch, but Jack Tate was on hand to score from the rebound, and the Reds led 4-0.

Indy made another great long run through the middle of the field and got off a great kick at goal, which was well saved. At the back, Belle Kadwell and Brock were fantastic in defence, working well together to strip the ball from their opponents as they worked their way downfield. This led directly to the next goal as Belle’s defence got the ball to sister Claire, whose fabulous pass to Ky allowed him the bury the ball in the back of the net for a 5-0 lead.

Perhaps the midfield got a little lax from here, and they failed to make the running back to help their defence on two occasions, and both were taken advantage of by the Yellow team who scored two goals to get back into the match at 5-2. Just before the break, another great show of passing between Jack Tate to Ky through to Indy, then back to Ky led to Claire bullying the ball past the keeper for the team’s sixth goal, and a 6-2 half time lead. 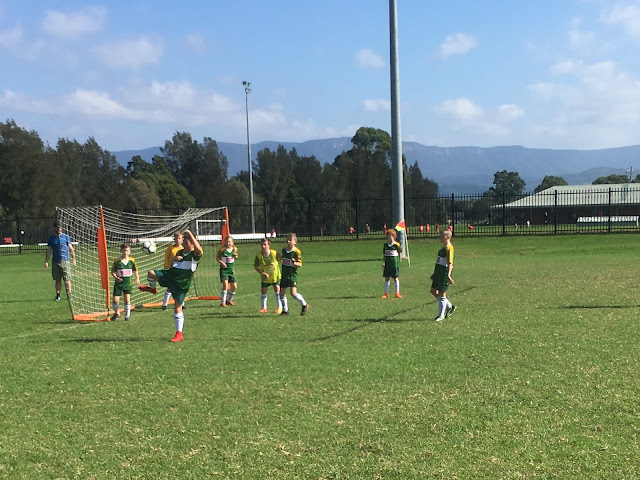 The start of the second half was highlighted by great defence by the back three of Brock, Josh and Jack-Ryan, and Jack in goals. They turned back four or five attacking raids. This pressure then allowed the front to take advantage, with a pass from Josh to Ky then moved on to Noah Black on the right wing, and his shot rebounded back to Ky who scored the first goal of the second half. Moments later a beautiful and pinpoint throw from Belle found Noah down the wing again, and he wound his way through the defence to score his own goal and take the lead out to 8-2. A defensive lapse allowed the Yellow team to get back to 8-3 before the Reds fought back again, as Belle pushed the ball out to Zoe Middleton who made a great pass to Josh in the middle, who in turn made a great pass to Jack-Ryan. Jack-Ryan may have blazed away himself in previous years, but his skills have developed no end, and he drew two opponents to him before expertly putting the ball at Ky’s feet, and he again beat the keeper to make the score 9-3.

Perhaps the Reds got tired from here (it was 29 degress), or perhaps they got complacent, but the Yellows kept fighting, and kept scoring goals. Two in succession and three of the next four in fact as the Reds changed their formations, and the score was soon 10-6. It could have been worse except for an exceptional piece of defensive work from Jack-Ryan, who saw his keeper drawn forward to try and save the ball, leaving the goals wide open. As the Yellows made their shot on the open goal, Jack-Ryan appeared from nowhere and cleared the ball away, right on the goal line. It was terrific, instinctive play, and for me was the play of the day. Ky’s sixth goal of the day came in the middle of this, after a terrific run and then pass from Josh left Ky with an open goal.

The final goal of the day was all down to Claire who was quite brilliant, making the play up the left side of the field and then making a stunning pass through three opponents to find Josh on his own, who dribbled to the goal and ensured he beat the keeper to score, and leave the game at a final score of 11-6. Josh himself said he felt bad being credited with the gal, because it had all been set up by Claire’s great work.

The Player of the Day was awarded to Jack-Ryan for his excellent efforts and improvement since last season. 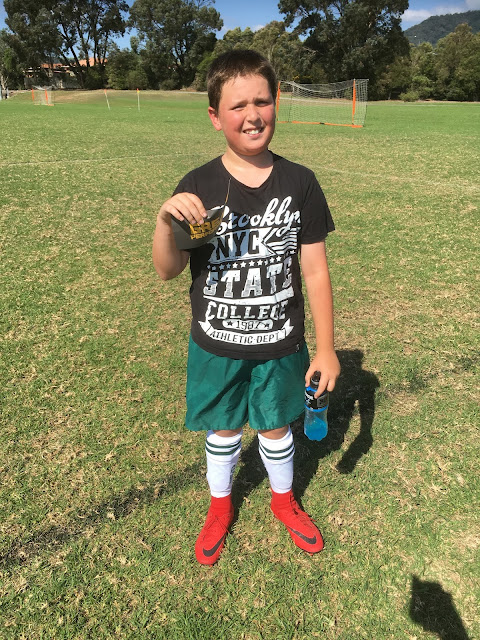 Everyone was terrific. Jack Tate had been good in the first half and made two or three terrific saves as goalkeeper in the second half. Brock Young was brilliant in defence, reading the play wonderfully and his positional play as a result stifled the attacking options of the Yellow team. Claire and Belle Kadwell were unstoppable, running like the Energizer Bunny all match. Indy Middleton also made several long attacking runs and showed good control of the ball. Noah Black had several chances up front to get goals and made some good crosses to his teammates. Ky is a goal scoring machine and could have had a few more with a bit of luck. Zoe Middleton fought hard as usual and refused to take a backward step against her opponents and got some good balls into her teammates in the centre of the field. And Josh had some good moments as well, looking to set up his forwards unselfishly and also played a great role in defence. Overall the team played well, though the midfield got tired on occasions and left their defensive unit short staffed in trying to keep at bay the attacking raids of their opponents.

Next week the Reds are at home again against the Albion Park Green team and will be looking build on their solid start to the season. 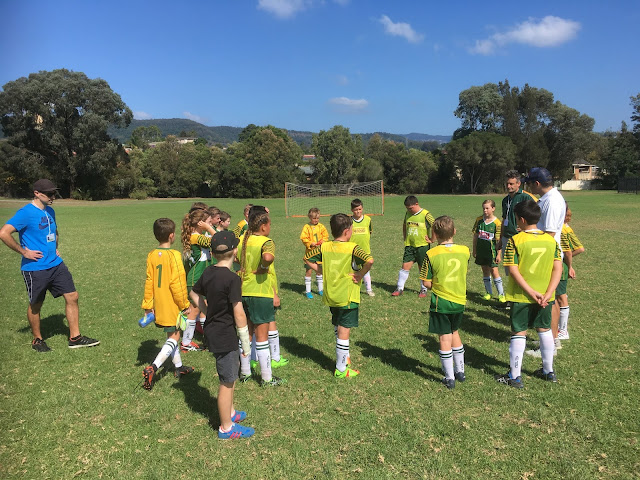