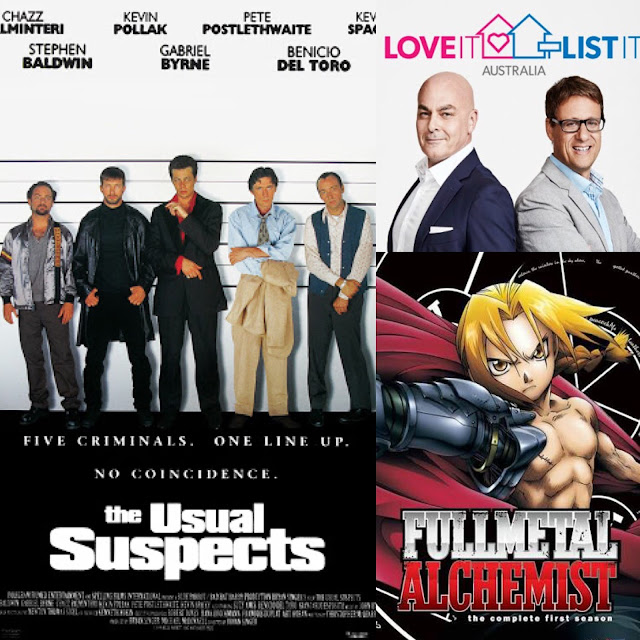 This week on Episode 13:

There’s Something on the TV! – It's Japanese anime time in Jessie's headspace, as she has started checking out the 2003 hit FULL METAL ALCHEMIST, while Bill has been lost with no sport and The X Files on a mid-season break, so for him it has been the lifestyle stylings of LOVE IT OR LIST IT AUSTRALIA that has filled his hole.

Crap Movies Bill is Forcing Jess to Watch! – After some rich comedies in recent weeks it was time to go for something a bit more cerebral for Jessie's movie of the week, so we have checked out the brilliant acting, writing and directing that all came together in 1995's superb THE USUAL SUSPECTS, where you won't know what has happened even after the movie is finished.

Album Review Switcheroo! – With Jessie's albums having dried up it's time to go in a new direction, and so we present to you our weekly playlist of ten songs, five from each of us, and we give you a run down on why we like them, and even give you a chance to experience it yourself!

Crap That Jess Has Been Watching On YouTube! – So if you animate songs from bands that Jessie loves, and even do kazoo cover versions of them, you too can have your own YouTube Channel. Apparently, Jess gives us the run down on not even dust like wtf which is apparently HILARIOUS! Meanwhile, Bill has been tracking down the 'shittiest band in Newtown' called Scabz after seeing them at the SLF concert in Sydney.

Scabz live at the Marlborough September 2017