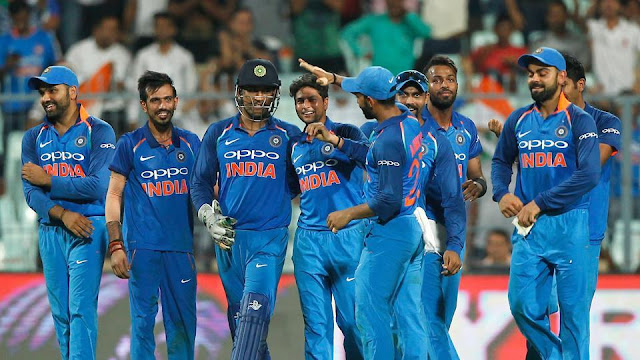 It’s India’s backyard, and they are happy to make sure everyone knows it. There was no long term preparation by the Australians for this ODI series as there was for the Test series six months ago, and the team has come in cold compared to the Indians having been in a constant cricket cycle. So far it has showed, and last night’s loss exacerbated this. There was a massive advantage in batting first in the oppressive heat of the afternoon, with temperatures that rose above 40 degrees. By comparison, the relative cool of the evening gave the Indian bowlers a much better atmosphere in which to do their work. Essentially they again out played Australia and won convincingly against a team that has its firepower missing and its batting line-up in a confusing mess.

In the same series four years ago, both sides scored 300+ with regularity when they went out to bat. Rohit Sharma scored 209 on his own in one match. So far that hasn’t been the case, and Australia’s cobbled-together bowling attack has done the job. Pat Cummins and Nathan Coulter-Nile have been superb, last night Kane Richardson was good and Marcus Stoinis has done the job of a good all-rounder. The spinners role on good wickets and small grounds has been thankless so far for Australia, though both Zampa and Agar would no doubt like a crack at bowling second on a wearing wicket. Keeping India to 252 when they appeared ready to mount a challenge at 3/186 off 35 overs was a superb effort. One that was unfortunately not matched by the batsmen. Kumar for India was magnificent, 6 overs taking 3/9 and ripping out both Australian openers was exactly what India wanted. Smith, Head and Maxwell tried to rebuild, but the damage was done each time a real partnership threatened. Smith’s dismissal at 5/138 was the end of any real chance, and a hat-trick from Kuldeep involving Wade, Agar and Cummins sealed the deal. Only Stoinis again could hold his head high, his innings of 62 not out off 65 balls holding the tail together being another important moment for him, not only in securing his place as the all-rounder in the ODI team, but in pushing his case for a Test spot at number 6 as the seam bowling all-rounder, possibly as early as in Brisbane in two months’ time. Australia’s demise for 202 was more than they deserved at 8/148.

Hilton Cartwright is being given plenty of international cricket away from the spotlight of the Australian media and public who are more interested in footy finals in September than ODI’s in India, whose only purpose is as a money spinner for Indian cricket. His dual failures at the top of the Australian order in the first two games will more or less go unnoticed by people in Australia, which is pretty much what the selectors want. By pumping game time into him away from home they are hoping that the experience he gains will be of benefit down the track when they bring him into the team for a fulltime shot at an all-rounders position. All of this seems unusual given that neither he nor Glenn Maxwell are being used at the bowling crease, nor indeed is Travis Head.

If these games actually meant anything, then surely as soon as Aaron Finch was injured they would have called for Usman Khawaja to replace him at the top of the order. And what the hell happened to Sam Haezlett who went to New Zealand in February and has disappeared again? Moises Henriques got two bats in the Champions Trophy, looked good until dismissed in both, and is discarded. Peter Handscomb HAS been brought over, and was still on the bench last night. The whole scenario appears a bit farcical. Are we seriously looking at the World Cup in two years’ time? Will a 5-0 drubbing in India be seen as acceptable because we’ll have had a look at our cricketers with a long term view of the future? The captain has only used five main bowlers in the two games so far, for the most part ignoring the bowling ability of Cartwright, Maxwell and Head. If this is the case, are these three mentioned good enough to hold their positions in the top five of Australia’s batting order? In the case of Travis Head, the answer is certainly yes. The other two? Well, would the top six for Australia look better as Warner, Khawaja, Smith, Handscomb, Head and Stoinis? Surely, unequivocally, the answer is yes.

Important or not, lacking meaning or not, coming home with a 5-0 defeat in this ODI series will deal Australia some serious damage coming into the home summer. In 2013 India won the seven match series 3-2 with two games abandoned, but Australia’s fight in that series gave it the confidence and form it needed leading into the Ashes series, which they then won 5-0. Mitchell Johnson and George Bailey forced their way into the Test team through their performances in that series, and we know how important their contributions were. Unless this team can fight back and find a way to win in an uninspiring ODI series, what would that result mean for the fight to regain the one trophy that Australians really care about.
Posted by Bill Peters at 7:52 AM

Email ThisBlogThis!Share to TwitterShare to FacebookShare to Pinterest
Labels: 2017 Australia in India (ODI)