The Lack of Surprise of Bangladesh Victory Tells the Real Story 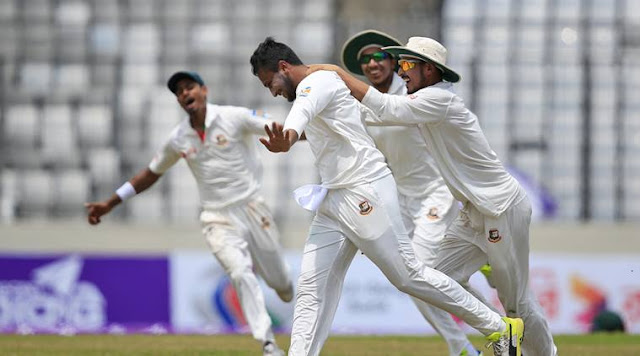 In this day and age of Australian cricket, the loss to Bangladesh last night was less surprising than the selectors decision to choose discarded spinner Steve O’Keefe as the replacement for paceman Josh Hazlewood for the remainder of the tour. That Bangladesh has improved this much in the last three years, and that Australia is still unable to come to terms with the wickets and tactics of the sub-continent, is an undeniable fact such that the former’s first Test victory over the latter, while celebrated quite rightly by the Bangladesh team and their country, really raises barely a ripple of surprise.

Both sides knew that the key to victory or defeat lay with David Warner and Steve Smith. How much those two left the remainder of the batting line up to score was always going to be the breaking point. When both had been dismissed, it left Australia requiring 94 runs with six wickets in hand. It provided the kind of pressure situation from which we could judge the temperament and steel of Handscomb, Maxwell and Wade, the three Victorians who for varying reasons of form, ability and perceived toughness have been installed over the past nine months into this Australian team. Like Australia’s malaise on the sub-continent, each performed as they have in recent times. Handscomb looked comfortable, once again getting a start and appearing as though he could win the game on his own, before once again falling before the job had been done. Apart from his match saving innings in India, he has promised the world and produced dying sprouts. It is a learning curve for him, but he needs to convert those starts. Maxwell too looked to be calm in the storm as wickets fell around him. He went to lunch with Pat Cummins knowing it was up to them to score the remaining 66 runs to win the Test. His meek prod to be bowled in the first over after the break was once again an example of the brain fades that desecrate his batting. The lack of concentration that blocks him from being able to fulfil his ability.

In a match where it is unfair to lay the blame for defeat at one man’s feet, especially given Usman Khawaja’s terrifyingly awful match with the bat, the subject of Matthew Wade must be brought to bear once again. No one disparages the tough conditions that he has had to keep in. Indeed, in conditions such as these, you must have your best and most disciplined keeper in the team to combat that. Of course, the selectors don’t see it that way, as there are at least six or seven keepers back in Australia whose glove work is generally regarded as superior to Matthew Wade. In this match, Wade let through 30 byes. That’s a large number, even for Wade. Again, these are tough conditions and sometimes some will get through, but the best example was on the first day, when a straight delivery from Hazlewood burst through his gloves and raced away for four byes. It was awful, a terrible look with absolutely no excuse for it to happen. So consider that – 30 byes, Australia lost by 20 runs. But you see, Wade was chosen because the selectors mandated that the team needed more runs from its number seven. It is why the vastly superior gloveman in Peter Nevill was cruelly cast aside last summer. Didn’t miss a ball, but averaged in the mid-20’s with the bat. So the batsman Wade was brought in. How has he gone? Well, since Adelaide last summer, he has batted 15 times for 255 runs at an average of 21.25. Those figures suggest he is not providing more runs at number seven. In fact, it is less than Nevill averaged as a Test batsman. Wade scored 5 in the first innings when the team needed him to respond. Yesterday, he was once again pinned to his crease on the back foot, struck down LBW for the second time in the match, this time for 4. He was not the sole reason Australia lost this match. His performance however must surely once again question his place in this team beyond this tour.

Once again Pat Cummins fought to recover the situation. Nathan Lyon played as he often does in these scenarios, freeing his arms and looking to score rather than survive. These two and Hazlewood fought to the end, but eventually were dismissed with 21 runs still to score. After 25 in the first innings, Cummins finished 33 not out in the second, as well as bowling his heart out on a dead wicket for four wickets. Is it too obvious to suggest that some of our batsmen should be taking the time to watch how he bats again their bowlers, and employ it in their own game?

On the other side it would be wrong not to applaud the bowling of both Shakib and Miraz, and the fields employed by Rahim which not only plugged the scoring holes but forced the batsmen to find other ways to get runs. At times they would have been worried, but they never seemed to panic, and this is what eventually got them the victory. Shakib’s 5/85 gave him ten wickets for the match, and Miraz’s 2/80 and Taijul’s 3/60 the perfect support.

Bangladesh thoroughly deserved their victory, and can now look forward to trying to win their first series against a higher ranked opponent. And who would bet against them? Australia’s batting in these conditions is all at sea, and with no reserve batsmen on tour the only possible change in that batting line up would appear to be Cartwright coming in to either lengthen the batting line up or taking Khawaja’s place. Of course, perhaps Handscomb could keep and Cartwright could come in for Wade. No, that would be too obvious a call. What an oversight it was by the selectors not to have Travis Head in this squad. With only a few days in which to recover, the muted joy of England’s loss to the West Indies yesterday has now been replaced by the agonising possibility of an Australian series loss in Bangladesh, leading into a home annihilation in the Ashes. What a difference four days makes.
Posted by Bill Peters at 7:35 AM