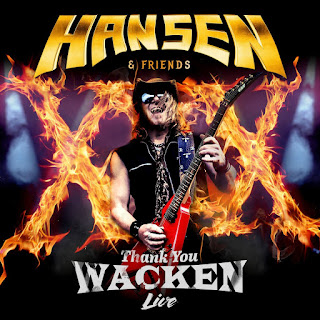 When Kai Hansen announced he was doing this project, obsequiously to memorialise over thirty years in the metal music business, as a fan I was as always interested in what it would produce. The album XXX: Three Decades in Metal I felt was excellent, and allowed him to explore other avenues that he couldn’t do in his other bands. With so much going on in his music life it was not surprising that he wanted to play this new material live, even if it could not be in a long form tour. Performing at Wacken in 2016, this album is the result of recording that gig.

Now, the one major problem this gig faced was this. The album was not released until September of 2016. The Wacken festival took place, as always, in early August, which meant that all of the material off the new album that was played at this gig had never been heard by the fans. In retrospect, as an Australian fan, it hasn’t been a problem for me, as I have had that album since its release, and I have had this recording since its release just a few weeks ago. But is there anything worse than turning up at a concert and not knowing half the songs? As a fan, it is the most difficult thing imaginable. You can’t throw yourself full belt into the gig, because you don’t know half the material. It could be rubbish, and you are left there with your arms folded. Waiting for the good stuff to come on. As I said, that didn’t affect my enjoyment of this album because I know all the songs, but I wonder just how the reaction really went over on the day (it looked positive on the DVD of the gig, don’t get me wrong).
It all sounds fantastic. Kai’s band that recorded the studio album is all here, except for drummer Dan Wilding who was off touring with Carcass, and so Gamma Ray’s custodian Michael Ehre fills in here with aplomb. Eike Freese on guitar and Alex Deitz on bass and backing vocals both show off their excellent skills and confirm why Kai was happy to collaborate with them in the first place. While all of the special guests who were a part of the original recording do not make an appearance here, there are a few who return to make their contributions to the “Hansen & Friends” concept.
If you haven’t listened to the album, then you will no doubt be just as confused as I imagine the crowd at Wacken were with all of the new material, but those who do know it will be happy and impressed with the live versions presented here. As on that album, the starring roles go to “Born Free”, “Contract Song” and “Follow the Sun”, where the rage that they have in the studio is replicated and enhanced here in the live setting. ”Burning Bridges” also sounds great live here. “All or Nothing” and “Fire and Ice” both sound terrific as well, with Clémentine Delauney enjoying her chance to sing these duets with Kai on stage. She has quite the presence.
Of the older Helloween material here, none of it can be faulted. It is kick started by what is still one of the greatest songs ever in “Ride the Sky”, through both the vocals and the duelling guitar solos in the middle. I still get chills listening to the song. Frank Beck, supporting vocalist here and now a member of Gamma Ray, produces a stunning version of “Victim of Fate”. It is always a pleasure to hear this song with full power and aggression. Michael Kiske comes out for his starring role in the Helloween staples “I Want Out” and “Future World”, while the set closer is the very underrated “Save Us”, where the ensemble gives the gig the finish it deserves, with both Frank and Clémentine lending serious support to this terrific song.

As live albums go, you won’t be disappointed with this offering. Even if you don’t know the newer material, the Helloween songs alone are worth the price of the album. Give the newer material a chance and you might be surprised as well. Once again, Kai Hansen seals his destiny as one of the finest and most influential musicians in the history of heavy metal.