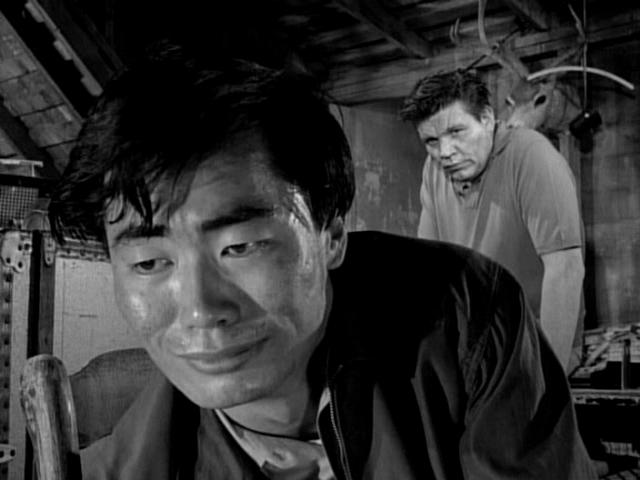 Perhaps it’s all a little bit too far-fetched, even for a Twilight Zone episode, or maybe that it just doesn’t go far enough, or perhaps… just perhaps… it jumps around too much between character portrayals to make this an episode that is completely convincing or watchable.

It is somewhat of a shame, as both of the actors involved, Neville Brand and George Takei, are accomplished. Brand was a certified WWII hero before turning to acting, so his portrayal as the washed up former war hero who is eventually defrocked as a coward, who shot a Japanese officer after he had surrendered, is in places chillingly poignant. Takei’s character, who begins by claiming his father was a hero at Pearl Harbour, before revealing he was in fact a traitor who led the Japanese to their bombing sites, convincingly plays the man who wants nothing to do with the conversation, until he actually holds the sword of the murdered Japanese officer, and he then is overcome by the sword’s stated plan from its engraving, ‘the sword will avenge me’.

The supernatural effect of the episode is only overshadowed by the constant to-ing and fro-ing of the attitudes and emotions of the two characters, and for me this tends to mess with the build-up of the episode itself. The story to me needed a slow constant build to the climax, whereas it has a haphazard up and down rollercoaster run, which for me does hamper the whole ending, which in itself is perhaps too predictable.