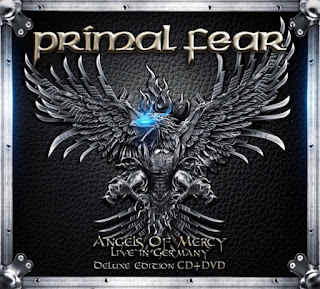 The expectation when you go to a live album is that you will get (hopefully) an authentic live experience from the band. One that hits you with a set list that is worthy of the band touring with, and then worthy of recording for the rest of us to listen to. In many ways then the live album is at the mercy of the album the band is touring on, and the selection of songs that has made up the rest of that tour. If the album is a good one then you expect the live album to be as well. If it is only average… well… you may have a problem.

Angels of Mercy - Live in Germany is a live album that I have listened to now for the two weeks since its release, and I can’t help thinking that there is something missing. I have not seen the DVD and am not judging it on that. It just isn’t working perfectly for me, and I can’t help but wonder whether this is as live as it is suggested. Is it overdubbed? I can’t be certain. But there are a few things that aren’t quite at the top of the game nonetheless. The relative sameness of Primal Fear’s recent material (as related in other reviews) mean that if you only concentrate on that double kick keeping time throughout it can get somewhat monotonous. That’s not what you are looking for on any album let alone a live release. There are also periods where Ralf Scheepers vocal range is beginning to require a bit of a tinker, and that can be slightly distracting when listen to songs for the first time in a live setting. It’s only in a couple of places where it is noticeable, and the use of delay tries to mask that, but most fans will pick it up. And yes there are places where I’m sure a little bit of doctoring has gone on in post-production. Perhaps I’m mistaken.
The songs you love sound great hear, and the ones you don’t at least sound good. “Final Embrace” and “In Metal We Trust” open the album in style. “The Sky is Burning” is just as annoying here as it is on the studio album.

Fans will get this album no matter what and will digest it as they always do. I know that we have been spoiled by the great live albums from other bands, and that not all live albums need to be judged against them. But it comes down to needing the live sound to be transferred faithfully to your preferred format, and for the songlist to be worthy of that live environment. This is a good live album of this band. It just isn’t completely brilliant.