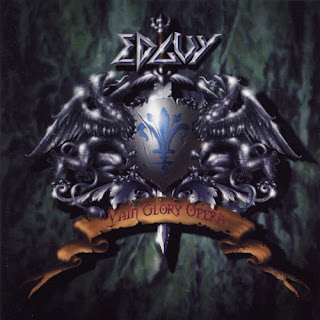 After the official/unofficial debut of Savage Poetry and the starting promise of Kingdom of Madness, there is a lot to like about Edguy’s follow up, Vain Glory Opera. The songs are tighter and better recorded, especially the drums which kick along stylishly with session drummer Frank Lindenthal putting in a terrific performance, the production is leaps and bounds ahead of their previous album, and it feels as though the band has found its purpose and drive. For the most part anyway, because as with all power metal releases there will often be the odd quirk which holds it back from being perfect.

There are no qualms about the opening stanza of the album. “Overture” jumps into “Until We Rise Again” which immediately gives you the sense of the updated Edguy product. Along with the following song “How Many Miles”, the pace of the songs are more upbeat that the general tempo of the previous album, Tobi’s vocals are not only of a better quality but are better focused along with the doubling to give them a choir effect. The drumming is miles more impressive, and the fact that the guitars are now turned up in the mix and are also more effective and involved in the songs makes this a whole new chapter and an immediately more enjoyable one.
It’s not all sunshine and roses though. Edguy will forever be a slave to the genre that they are a part of, and as such they do have a tendency towards producing those terrible stains upon the power metal genre, the power ballad. There are two here on Vain Glory Opera, and both are as unbearable as the other. Certainly they are better constructed and produced than “When a Hero Cries” from the previous album, but it will rarely ever be seen by me as a way to enhance an album. “Scarlet Rose” pops into the mix after the opening three tracks, all of which have done an excellent job to getting the album to this point, and I’m afraid all of the momentum is halted at this point because of it. Once again, it isn’t a terrible song, and the band sounds great, but it is a disappointment. “Tomorrow” however does exactly the same thing, killing off the mood of the album in the second half. It sounds like it wants to be like Whitesnake’s “Here I Go Again” without every getting out of that first gear. My abhorrence of power ballads is well known to those that read my reviews, and the number of albums they have killed is innumerable. This is all keyboard and no guitar and basically no drums. If you want to do these kinds of songs, for goodness sakes do them as B-sides to singles. This is just awful.
The saving grace for “Scarlet Rose” is that it is followed up by the wonderful “Out of Control”. I do think I would enjoy this song without its special guest, as Tobi and the backing vocals sound great and the band really nail down their contribution, with hard hitting double kick drums and great guitar solos by both Jens Ludwig and Dirk Sauer. But what makes this song even better are the guest vocals within from Blind Guardian’s Hansi Kürsch. His energetic and magnificent contribution lifts this song from very good to great. I think this is the first ‘great’ Edguy song. It is lifted again when what is probably the second ‘great’ Edguy song follows it, the title track “Vain Glory Opera”. I guess it sounds a bit “The Final Countdown”-ish in the middle where the pomping keyboards take centre stage and the choiring vocals through the middle of the song, but again the guitar solo section is terrific, along with a contributing guitar solo from Stratovarius’ Timo Tolkki and the contributing vocals again from Hansi Kürsch. This is then followed by the fastest song on the album “Fairytale” which is a welcome addition to these three songs that are the star attraction of the middle of the album. This is the section where you can hear that Edguy have got themselves together and have found their mojo. Great harmony guitars, Tobi’s vocals are beginning to find that air that they needed and the rhythm of the bass and double kick drums that are driving the songs, and not just keeping everyone in time.
After this enjoyable interlude, the mood is dialled back a tad with “Walk on Fighting” which is only an average song in most aspects, before it segues into the aforementioned ballad tripe of “Tomorrow”. This again segues into the infinitely better “No More Foolin’” which returns the album to the fast paced drum and guitar driven antics where Edguy are at their best. This mirrors the best aspects of a band like Accept or Motorhead, with lyrics built to chant along to either at home or in concert. Seriously – why isn’t the album full of songs like this? Is it just me, or would Edguy’s reputation be immensely better regarded if they stuck this frame of the metal industry and withdrew from the power ballad side? Just to emphasise this, to finish the album the band does a rousing cover rendition of Ultravox’s “Hymn” which closes out this opus in style.

This is a 66% album for me. “Scarlet Rose”, “Tomorrow” and even “Walk on Fighting” are in a different league compared to the rest of the album. If you take those songs out it makes it a 38 minute album instead of a 51 minute album. Short, yes, but for me this would be a 4/5 or 4.5/5 album in that instance. Keeping them in does drop the overall rating of the album, and while it is in my opinion still above average it is disappointing that I cannot give it a better rank overall because of the misnomer of three songs.