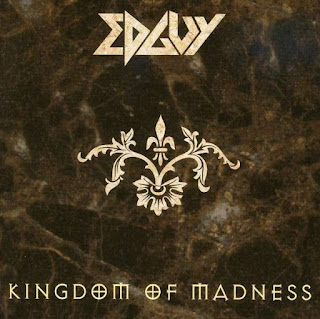 I came into Edguy on the Mandrake album about 15 years ago, and it was that album and Hellfire Club that made me a fan of the band. So when it came to going backwards to discover the earlier albums there is always that doubt in the back of your mind, wondering if anything could be as good as the albums are where you actually discovered the band. Such is the case here for me with Kingdom of Madness, which depending on your view of the situation is either the official debut of the band or ranks second behind the original release of Savage Poetry. In any case, it is an undeveloped sound compared to the two albums I knew so well.

More than anything else, it is the song structure here that still has unsanded edges on them. The basics all sound good, but there is a definite difference in the maturity of the song writing and the structure of the songs as they are played. Perhaps what it is mostly is that the band itself seems unassured of its own place in the music world. The drums, while technically proficient throughout with that typical power metal double kick, are nonetheless for the most part just a timekeeping device rather than coming into their own. They are also very forward in the mix, much more so than the guitars, which is a little disconcerting. The fact that the guitars of Jens Ludwig and Dirk Sauer are not as prominent as they could be isn’t a huge factor but it does seem unusual given the history of power metal bands and what drives them to fans. It mightn’t have been such an issue for me if the drums had been more technical, but they aren’t. Even Tobi’s keyboards often seem higher in the mix that the two guitarists.
I get the feeling that these issues help to make the songs sound more simplistic and stagnant than they really are. The opening salvo of “Paradise”, “Wings of a Dream” and “Heart of Twilight” all have their moments, without any particular part of them jumping out at you and grabbing your undivided love of the track. Perhaps it was that there were other bands out there doing these kinds of songs better, with more emotive impact both musically and vocally that Edguy do here. You can decipher the bones of the songs and see and hear what they perhaps could have been, but they just don’t reach those lofty heights. They are good solid power metal songs that don’t get beyond that. The instrumental “Dark Symphony” seems a strange implement here to move into “Deadmaker”, which then changes tempo between the vocals and solo section in a combination that startles until you can get used to it. This is followed by “Angel Rebellion” which after a slow start picks up by the end to a satisfying conclusion.
“When a Hero Cries” is what makes power metal so difficult to completely embrace as a genre. The power ballad is a great stink on the face of metal, and this truly is one of the worst examples of such a song. Just keyboard with silent mournful vocals over the top. For goodness sakes, there is a place for this kind of garbage, and it isn’t on an album from a band that is purporting to make its way in the metal industry. It completely bombs out the momentum of the album, and truly makes you question why you decided to pick up and listen to this album in the first place. It is an abomination, a terrible piece of music that does not befit this or any release.
The closing track is the perhaps the first instalment of Tobi’s grandiose vision for the future, with “The Kingdom” stretching out beyond eighteen minutes in length. It does however have an unusual structure, with the laughing statement that breaks up the middle of the song. It then fades in and out of style, with the quiet reflection session coming out of a faster paced double kick pattern. Tobi is looking for the epic finale, the one that the punters will love and remember, similar to Helloween’s “Keeper of the Seven Keys” or Iron Maiden’s “Rime of the Ancient Mariner”. It doesn’t approach either of those songs, but you can sense it is the direction he wished to head for.

Kingdom of Madness is still a good listen, with enough of the familiar sounds to make it worth your while. I tried to work out if I would enjoy this album more if I had come into Edguy at the beginning, and moved through their discography from the start rather than coming in at album number five and discovering them in reverse. My feeling is that yes, that would be the case. Despite that, for those that are power metal fans of this era, this is an album worth enjoying.