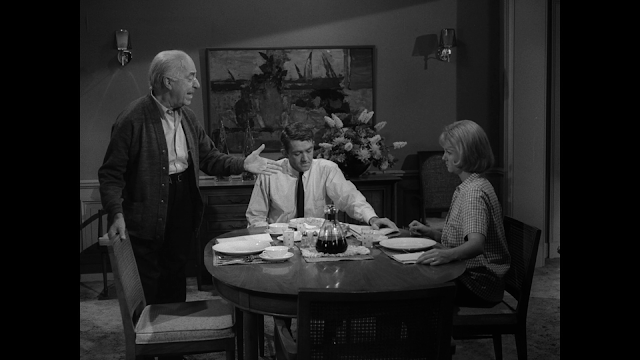 What does it say about a story when the person who wrote the original script dislikes the extensive re-write so much that he asks to be credited under a pseudonym? This is the case here, and while that may be a bit extreme it doesn’t bode well for what lay ahead.

The concept works well enough. Our protagonist Sam Forstmann spends all of his time tinkering with a grandfather clock, that his father had purchased on the day that Sam was born. He now believes that if the clock ever stops, then he will die. This causes disruption in his household, and though he then sells it to appease his family, it is only next door so he can keep an eye on it. However, when they go away for the weekend he tries to break in to ensure it is wound, and is arrested.

Despite the appearance of Ed Wynn in the main role, this story never really kicks into gear. Even the third act scenes where Sam is talking to his spirit, announcing the clock has stopped and it is time to go, just don’t give this episode a defining moment, something that makes it unforgettable for a good reason. It’s OK, but nothing special.