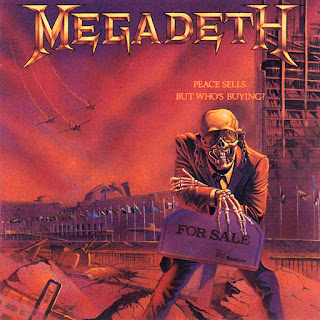 My introduction to Megadeth’s sophomore album was inevitably through the magic of music video, and their appearance on music shows such as Rage on ABCTV late on Friday and Saturday nights. Both videos for “Peace Sells” and “Wake Up Dead” were excellent, and the songs even better. My problem living in Australia in 1986 was that it was almost impossible to find this album. It wasn’t until I finally discovered Utopia Records in Sydney that this became easier. As it was, it was a miracle when I finally found this on vinyl in a rack at Wilson’s Records in Wollongong in early 1988, and I finally was able to experience the album of PS…BWB rather than just the two songs I knew so well by that time.

Is there a finer opening song to an album than “Wake Up Dead”? It would be far too difficult to nail down an exact answer to that, but I have always felt that while there would be many songs that could be rated as an equal, certainly none is better than this. The needle would hit the vinyl, and then BANG, we are straight into the album, with Dave explaining to us about his sneak entry into his own house that evening. The difference between the opening thirty seconds of this song and everything that appeared on their debut opus is startling. That album was raw thrash just thrown out there, a wall of noise coming at you at a rush of speed. “Wake Up Dead” is heavy – fucking heavy – but refined in a way those early songs were not. The band is tight, the music is hammered together and the production is a hundred times better without stripping back any of the anger and fury that is pouring out of the speakers. This is a classic, and Dave being able to come up with songs about particular relationships was something that he can still draw on. “The Conjuring” is the follow up, and continues in a similar vein. However, though it is fast and heavy it doesn’t come across as frantic as the band’s earlier material. It is full of great riffs and fast and heavy material, but it is not in a frenzy. It is a real triumph as to how quickly the band matured in writing and playing, and about how better production can tighten songs that are pliable due to their strength.
“Peace Sells” is a classic in its simplicity, beautifully held together by Dave Ellefson’s wonderful bass line rumbling along underneath the simple by effective drum and guitar riff, while Mustaine stands on his soap box and pontificates on his vision of the world as he sees it. It also comes with the perfect lines for crowds to cry back at the band during concerts, an easy form of hero worship through the lyrics. The music video exacerbated this through its clever depiction of world events, and it spoke to the teenage generation at their hearts. Combine politics and anger in a song. It’s a winner. This then crashes straight into “Devil’s Island”, with Ellefson again flying along on bass guitar throughout while Mustaine and Chris Poland have a ball in their selected category. It’s amazing how fast a five minute song can go when it goes at this pace. Great stuff.
The opening to the second side of the album is “Good Mourning / Black Friday”. Good Mourning is just that, a slower mournful opening with Dave’s spoken feelings, before we suddenly fall downhill into Good Friday, which holds the torch for speed metal high and proud on this album. This flays along at what Dark Helmet in Spaceballs would call Ludicrous Speed. It is almost impossible for the listener to keep up with the song, and I can’t imagine how on earth Mustaine and Poland managed to pick their guitar strings at this speed. This is just awesomely fantastic, and even though it will rick your neck completely you can’t help but thrash along in time. Brilliant stuff. “Bad Omen” starts off in a similar vein to Good Mourning, but maintains a more attainable speed once the song starts, before careering over the edge as well in the final third of the song.
If there is an issue to be had, then it is with “I Ain’t Superstitious”, a cover version of the song originally recorded by blues artist Howlin’ Wolf. This version is (of course) a lot different from the original, but it is still noticeable that it doesn’t completely fit the vibe of the rest of this album. It is listenable, yes. And it must be said, even perfect albums can have a slight flaw in them (yes I know that is basically a contradiction, but I don’t care). Everything is forgiven by the closing track “My Last Words” which again starts with a slower riff before bursting into the heart of the song at speed, and Mustaine taking the bull by the horns and letting it charge. This is a terrific closing track, leaving you just as high and blazing as you are by the opening of the album. Just scintillating.

Apart from any reservations raised by “I Ain’t Superstitious”, it is practically impossible to find any weaknesses in this album. While Gar Samuelson’s drumming is sometimes criticised, his work here is solid and builds the basis for the other three musicians to weave their spell. Dave Ellefson is tremendous, and his bass guides throughout are a major component of what makes these songs so heavy in the bottom end. Chris Poland and Mustaine himself once again show a wonderful combination in their guitaring, and it is a disappointment that Poland was dismissed following this album (along with Samuelson) for excessive drug use as their partnership is just fantastic here. On top of all of this, Mustaine’s vocals continued to suit his songs, and with a deepening political and social bent in his lyrics the album ticks all of the boxes. Even as a stepping stone to further great albums to come, this still holds its own and stands the test of time some 30 years on.