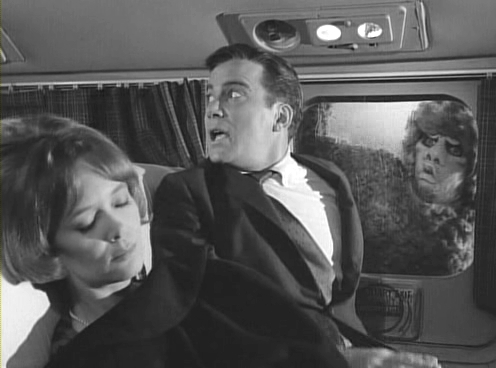 This would be one of the best known and most parodied episode of The Twilight Zone, not only for the episode itself but for the dialogue by guest star William Shatner in the main role of the show. It has transcended the generations.

The amusing part is that it all seems a little convenient. Robert Wilson has spent six months in an institution recovering from a breakdown that came on an aircraft in a storm. And guess what? On his way home with his wife, he’s going on an aircraft, and yep it’s smack bang in the middle of a storm! Amazing! And what is even more amazing is that Wilson happens to see a thing on the wing (“…some…THING… on the wing!) of the plane while they are flying, and not only does it appear to be tinkering with the engine, he is the only person who can see it! Because every single time he calls someone over to have a look, this gremlin seems to know, and flies off out of sight! Remarkable!

It might appear convenient, but that is the tie in of the story. Wilson understands that people will think he is crazy and that it is a recycling of his previous condition, but he is also adamant that he is right. His desperation to save the day, by opening the escape door and firing a gun at the gremlin, leaves everyone in no doubt of his mental state, but as Serling himself adds at the conclusion of the episode, the physical damage to the plane, once discovered, will confuse everyone even more.