The Cure: Is This the Greatest Concert Ever? 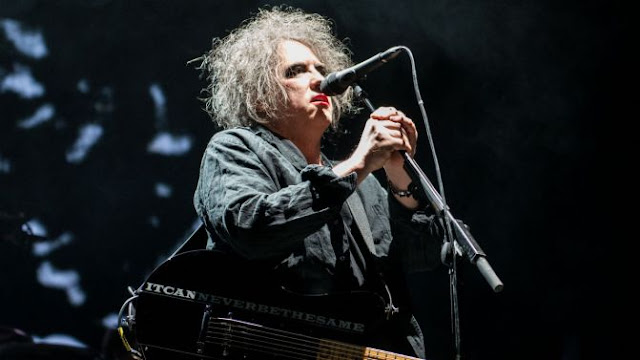 The title is not a faecetious question. It is one that is posed when taking into account that my style of musical taste is predominatntly that of the heavy metal genre. And I have seen all of the greats of that genre too. Iron Maiden, Metallica, Megadeth, Black Sabbath, Dio, Helloween, Ozzy Osbourne, Gamma Ray, and that's just to name a few. I have seen them all at their peak, and I have seen them all in their glory. So the question I pose not only comes from the background of what I normally listen to, but also from having seen a hundred different bands and artists in a multitude of venues, big and small. It is a question that deserves an answer.

Last night I journeyed to Homebush in western Sydney to Qudos Bank Arena (and yes this has changed its name a million times over the years) to see The Cure. My wonderful wife Helen has been a fan of the band forever, and she infused in me an appreciation if not a love for their music. I have rarely in my life chosen to put on an album of The Cure, but whenever it has been put on by others I have always enjoyed it. Disintegration and Wish have always been my favourite two albums, but my enjoyment of their music isn't limited to those albums. I have always wanted to see them live, to see what they would be like, and Helen had always seemed to miss them when they toured Australia. On this occasion we both managed to be on the same page.
There was no support act, it was all The Cure. They came on stage at 8.10pm, and put on a display that I have some trouble explaining just how good it was. The band was just amazing, truly amazing. The rhythm section of drummer Jason Cooper and bass guitarist Simon Gallup drove the night along. Jason's drumming was perpetual motion, rolling along his drum kit like liquid, not missing a beat and keeping the whole band in check. The guttural distortion on Simon's bass guitar reverberated throughout the arena, even in the songs where you would not necessarily notice that instrument. It kept that bottom end solid. Keyboardist Roger O'Donnell was unobtrusive and effective, while guitarist Reeves Gabrels was terrific, with a lot of technical stuff that may have gone unnoticed by those keeping their attention firmly on the main man, but he was very impressive.
Trying to not sound obvious and overly gushing about Robert Smith is somewhat impossible. His voice remains positively awesome after all these years. His guitaring throughout remained terrific, but it is his vocals that are extraordinary. They soar, literally soar, when necessary, and as the face and voice of the band he is still doing an amazing job.

It is a different style of concert from anything I have ever been to before. The majority of the bands that i see are energetic, jumping around the stage, trying to pump up the crowd and get them involved and rollicking. With The Cure, there is minimal movement by the players throughout. Simon walked around the stage most of the time, but the others held their ground, happy to be where they were and play their instruments as they were expected. But they didn't need to. The show itself was amazing. The light show was like none that I had experienced before, and the screens behind the band, that changed for each song and the mood of each song, was brilliantly done.

And the show itself? Well, the band came on at 8.10pm, and finished at 11.20pm. That's right, over three hours of music, 36 of their greatest songs in all. What impressed me most about this, apart from the technically brilliant way the band played, and kept faithful to each song while giving each its live performance, was that there was no pause between songs, no talking or interaction with the crowd that wasn't the music, no agenda to put forth. Robert spoke three times during the night, for a total of about thirty words. It was all about the music, and it was just magnificent.
The crowd loved it. From the slow writhing of bodies during "Let's Go to Bed", to the unadultered joy of "Friday I'm in Love", "Just Like Heaven" and "The Lovecats", they had them in the palms of their hands. All of their hits were played, and just about every song you could consider was there.
I was blown away by some of the live versions of songs. "Pictures of You" swam in to the start of the night so wonderfully well, and was the first real intoxication with Robert vocals. "A Night Like This" was just amazing, and was a high point for me. With no sax to be found, this came as close to a rock song as this band could play, and the exchange of horn for guitar worked brilliantly. This was followed by "All I Want" which continued in this vein. "Primary" conatined all the energy that was to be expected. "Just Like Heaven" and "Disintegration" and "Fascination Street" were all that could have been hoped for. "Burn" was another that was a highlight for me, it sounded terrific. The final closure of "Close to Me", "Why Can't I Be You" and "Boys Don't Cry" was the wonderful final punctuation mark on what was an unbelievable concert experience. The final scene, where an obviously emotionally moved Robert Smith uttered those words "We'll see you again", were received by the fans by raising the roof in appreciation.

So what is the answer to my initial question? As I said earlier, I have seen a lot of my heroes and a lot of great gigs. Last night's performance was the equal of anything I have seen. I truly hope that I get the chance to see them again in the future.

Edit this setlist | More The Cure setlists
Posted by Bill Peters at 12:45 PM