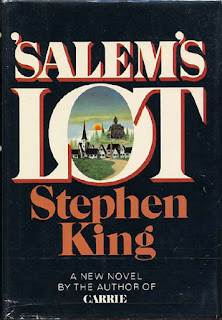 The prologue to 'Salem's Lot always intrigued me, mainly because although King doesn't state it outright and there is plenty of room to manoeuvre in the opening of the book, it pretty much tells you that no matter what is about to happen in the next few hundred pages, Ben Mears is going to survive and he is going to have a young boy with him. The prologue names neither of the characters involved, but when you then move to the opening chapters and meet Ben Mears returning to the home where he spent four years of his youth, you immediately identify that this is the most likely character being described. This does then give you cause to believe that he will survive some calamity, given that he has to return to the Lot.

A week later he awoke sweating from a nightmare and called out the boy’s name.
‘I’m going back,’ he said.
The boy paled beneath his tan.
‘Can you come with me?’ the man asked.
‘Do you love me?’
‘Yes. God, yes.’
The boy began to weep, and the tall man held him.

So the opening establishes Ben Mears, returning to town after what appears to be a traumatic death of his wife. It establishes his credentials as a former resident, and that the spooky house on top of the hill - the Marsten House - has some history with him, and that the mystery that surrounds the previous occupants is one of some interest. It also quite quickly establishes the mutual attraction between Ben and Susan Norton, and the likely problematic appearance of Susan's current boyfriend into the picture at some point.

The early passages here set up the Marsten House as a central figure in the coming story. Perhaps it is just me, but in writing this doesn't it seem just a little convenient that at the very same time Ben returns to town and wishes to rent out the Marsten House to live in and write his new novel, that the house, which has been empty for all those years, is suddenly sold? I mean, just a little too convenient? Yes, I know it is a fictional horror novel, and reality takes a backwards step in this regard, but come on. No one wants it, then two different parties want it within days of each other? Yeah OK Bill, leave it alone.

There is a lot more set up here in this book than there was in King's previous book Carrie. The characters of Eva Miller, Weasel Craig, Win Purinton and Mike Ryerson, to mention just a few, all within that instance of the morning ritual, shows a more elaborate effort in bringing to the reader's attention the folk of 'Salem's Lot, and suggesting that their roles in the story ahead will be somewhat significant.
Posted by Bill Peters at 8:30 PM